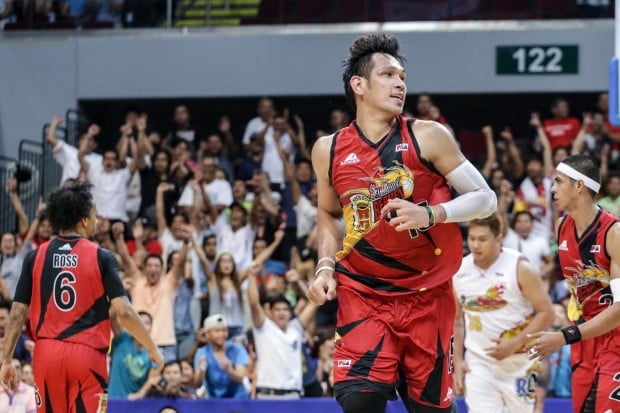 With another mammoth production, June Mar Fajardo is slowly running away with the Best Player of the Conference plum in the 2016 Smart Bro PBA Philippine Cup.

Against a tough Rain or Shine crew, the two-time PBA MVP poured in 36 points, 18 rebounds, five blocks, and three assists to keep San Miguel afloat before a late barrage allowed the Beermen to snatch a 109-105 win in Game 1 of the best-of-7 semifinals series on Tuesday.

As always, the soft-spoken giant is more concerned with the victory that came along with his monster numbers.

It wasn’t a walk in the park for the Cebuano stud, as he had to deal with the Elasto Painters’ bevy of big men in Beau Belga, JR Quiñahan, Raymond Almazan, and Jewel Ponferrada.

A proof of the hard battle downlow was scratch on the side of his right eye, which he incurred in one of the rebound plays against Ponferrada.

Fajardo also humbly admitted that he didn’t do it alone, with the support crew finally coming alive in the fourth to complete the 22-point comeback.

“Nag-step up yung bench namin at yung depensa nung second half,” he said, as San Miguel outscored Rain or Shine, 38-14 in the fourth quarter.

But despite the emotional high dealt by the big win, Fajardo knows that San Miguel should pick up a lesson
or two from the grindout battle as they brace for an enough tougher road ahead.

Game 2 is on Thursday, still at Mall of Asia Arena.