Aces shut down Romeo, Batang Pier to even semis series 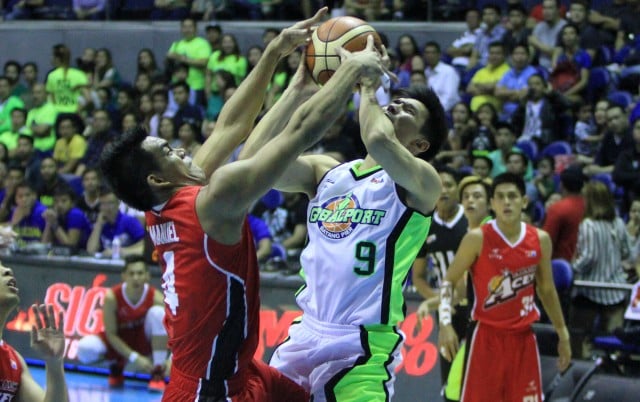 Alaska Milk stopped Globalport’s searing three-game playoff run, outplaying the Batang Pier in a gung-ho battle for a rousing 100-76 victory that forced a tie after two games in their side of the Smart Bro PBA Philippine Cup best-of-seven semifinal faceoff Wednesday at the Smart Araneta Coliseum.

The Aces established control and broke away curiously after a fracas late in the opening quarter that drew 13 technical fouls.

The game ended with a total of 16 T’s, matching the record set during the Alaska-Shell road game in Butuan City back in 1997.

But Alaska coach Alex Compton insisted the incident was not the story of the game.

Compton said his troops’ tremendous defensive effort and sustained energy keyed their bounce back from a 93-107 defeat in the series opener Monday.

After splitting the first two games, the two teams practically start their series all over again in Game Three on Friday also at the Big Dome.

“Halatang-halata na mas mabilis kami ngayon. We’re really slow in Game One, and that’s not to take away Globalport dominating us then,” he said.

“We have a better defensive energy. They’re tough, and I don’t think they were rattled (by the incident). I don’t think Pido (Jarencio) is soft. He’s been through a lot,” he added.

Then through much tension, the Aces, the more seasoned team, ripped the Batang Pier apart.

Terrence Romeo was in his usual devastating form in the first half, erupting for 18. But he was held to two in the final half.

The Alaska backcourt players redeemed themselves in this game after being blasted with 41 points by Romeo in Game One. Reserve guards Chris Banchero and RJ Jazul led their fightback with 18 and 17 points, respectively, while Jvee Casio had his own stellar game with 13 markers, four rebounds, two steals and one assist.

The Batang Pier stayed in the battle through the first half but slowly faded away in the second half with the Aces keeping tremendous pressure on defense.

Not helping Globalport’s cause was Jay Washington taking an early exit on two technical fouls.