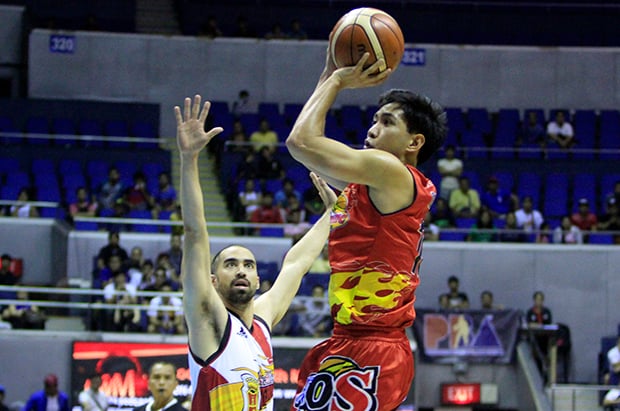 Rain or Shine dodged the bullet this time and emerged with a big morale-booster to boot.

The Elasto Painters narrowly avoided another fourth quarter meltdown to beat San Miguel 105-97 Thursday and even up their Smart Bro-PBA Philippine Cup semifinals series at the Smart Araneta Coliseum.

Jeff Chan led Rain or Shine’s balanced offensive with 16 points and the entire team once again dominated the defending champions from the first quarter on before hanging on unlike what they did in a 105-109 loss in the best-of-seven duel’s opener last Tuesday.

“It’s almost the same story, but fortunately for us it’s got a different ending,” said Rain or Shine coach Yeng Guiao, whose team led SMB by as many as 22 points before faltering in the stretch of Game 1.

The E-Painters towed the Beermen by as much as 59-34 on Thursday, but the memories of Game 1 came back when the Beermen staged another mighty comeback and whittled the difference to just 95-100 still 1:04 left.

Good thing JR Quinahan, Paul Lee and Chan were there to deliver the crucial charities that kept Rain or Shine’s head above water.

“We couldn’t afford to make the same mistakes that we had in Game 1,” said Guiao. “We knew if we went down 0-2 the series is over. You can’t get back from such a series deficit against a very strong team like San Miguel.”

The fact his team has lorded it over SMB twice, albeit with split results, added Guiao, gives his team a boost in terms of mind-set now that the series has been reduced to a best-of-five.

“We’re starting all over again and I guess it just gives us the confidence,” said Guiao. “To lead San Miguel by more than 20 points in two games…. The mere fact we can do that gives us a lot of confidence that we have a chance in this series.”

Proven right is SMB coach Leo Austria, who predicted on the eve of the game that such a Game 1 comeback “would never happen again.”

June Mar Fajardo paced everybody with 38 points and 17 rebounds. The 6-10 behemoth scattered 14 of his points in the fourth period, but playing for more than 41 minutes in the first game and almost 40 in the second showed its toll as he missed six of free throw tries in the final canto.

The Game 1 support the likes of Ronald Tubid, Arwind Santos and Chris Ross lent was hardly seen while the ones provided by Alex Cabagnot and Marcio Lassiter also ultimately proved futile.

“I know from the very start that Rain or Shine will bounce back after that embarrassing loss to us,” said Austria. “It was very evident that they are well focused. They are very prepared for this game.”

Concrete proof of that is Chan, who went scoreless and missed a game-tying triple in the opener, but highlighted his personal bounce-back game by hitting back-to-back triples that partly quelled SMB’s rally and gave Rain or Shine a 100-87 spread.

Behind Fajardo’s three points, Cabagnot’s layup off his own steal and a Tubid trey the Beermen closed the gap to within five points. Their doom was sealed, however, when they went just 1-for-2 the rest of the way and their fouling spree to stop the clock backfired.

Don Trollano added 13 points, Quinahan 12 despite going 4-for-14 from the field, Lee 11 and Raymond Almazan and Gabe Norwood 10 each. Even Jericho Cruz did his part by complementing his eight points with two crucial rebounds in the endgame while Jewel Ponferrada and Beau Belga alternated with Quinahan and Almazan in trying to make life hard for Fajardo.

“Everybody made a contribution,” noted Guiao.

“The important thing for us was keeping the pace fast to our liking,” added Guiao. “June Mar is almost unstoppable, but we need to just keep him working. We have to make life difficult for June Mar and I guess that worked, that’s why he was missing those free throws in the endgame.

“If this goes to a Game 7 we’ll give him hell for seven games.”

Cabagnot scored 17 of his 24 points in the second half, Lassiter 11 of his 13 and Santos 10, but Tubid just had seven points, eight below his Game 1 output, while Ross got into early foul trouble due to tussles with Chris Tiu and wound up scoreless and nowhere near the seven-point, seven-steal game he had just two nights ago.

It didn’t hurt Rain or Shine any that it again seized the lead from early in the first quarter on and sustained its strong start in each of the three remaining stanzas.

Cruz and Maverick Ahanmisi opened up the third period with triples, sparking a 10-0 run that stretched their 49-34 halftime lead to 25 points before Lee and Cruz also boomed in from deep to lead the E-Painters out of a 63-56 count and into an 81-64 cushion going to the fourth.