Austria warns Beermen amid 1-2 deficit: 'Don't wait for me to get angry'
Close
menu
search

Austria warns Beermen amid 1-2 deficit: ‘Don’t wait for me to get angry’ 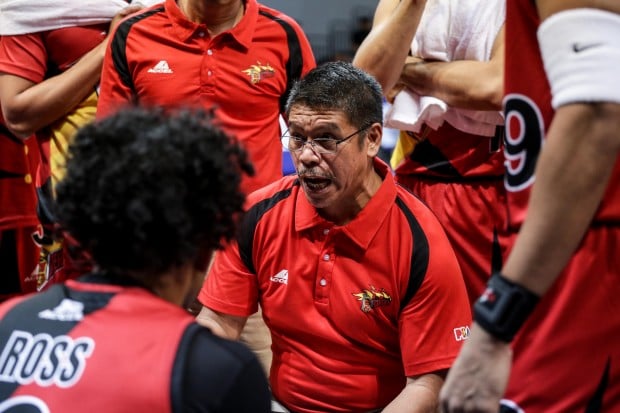 It was tiebreaker San Miguel failed to grasp.

As San Miguel coach Leo Austria looks at a 2-1 series deficit in the semifinals, he knows there’s one thing the defending PBA Philippine Cup champions lack.

“We need discipline,” Austria said in Filipino. “That last play we drew up wasn’t followed, that was the turning point of the game because we were down by one [107-106] and it did not happen.”

“Our discipline just disappears during the game. I think that’s the cause.”

San Miguel’s last play ended on a missed Marcio Lassiter floater. June Mar Fajardo was there for the offensive board but Rain or Shine guard Jericho Cruz stole it.

Cruz was fouled then landed awkwardly and Chris Tiu replaced him for the ensuing free throws for a 109-106 lead at the five-second mark of the fourth.

‘I can get angry’

Austria said his players should not “underestimate” him as a coach. Though he doesn’t rain them with profanities, the mild-mannered tactician said he can still get angry if the line is crossed.

Still, Austria is staying positive and even likened their circumstance to classic Philippine action movies.

“We’re still not out,” Austria said. “That’s the beauty of it, we’re like the heroes of a movie where we get beat up first then we’ll win.”