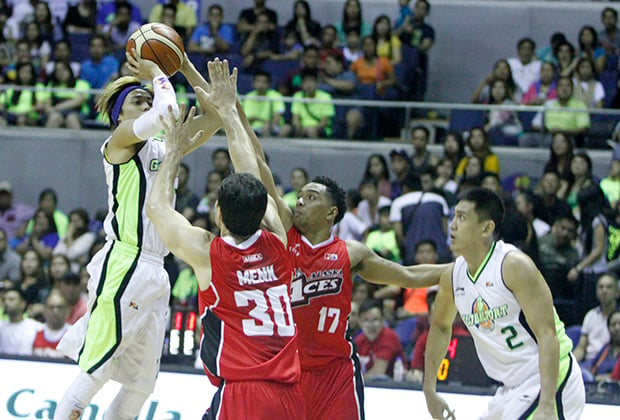 The Alaska Aces made short work of GlobalPort in Game 3, leading wire to wire and effectively exploiting the Batang Pier’s collective inexperience. Alaska is now on the verge of returning to the Philippine Cup Finals, where they narrowly lost to San Miguel Beer last season in seven hard-fought games. Without a doubt, the Aces are pumped to have a very strong shot at going back to the Finals, where they may even meet the Beermen again and have a shot at redemption. They will need to finish the job in Game 5, though, because GlobalPort is the kind of club that feeds on momentum. If the Batang Pier manage to steal Game 5, it’s a strong possibility they can ride that momentum and push this series to the limit.

The Batang Pier just seem out of sorts and out of their element. After a big Game 1 win where Terrence Romeo rang the bell for 41 points, GlobalPort has played below par in their last three games, and it seems like Alaska has them all figured out. Coach Pido tries something different by having Stanley Pringle come off the bench in Game 4, but that didn’t work as well. Now, even more adjustments may need to happen if the Batang Pier are hoping to shock the world and force a Game 6 against the #1 seed.

1. TERRENCE ON A TAILSPIN

– Terrence Romeo has been scoring heavily in this series, but that doesn’t mean he has been efficient. On the contrary, Romeo hasn’t been shooting very well ever since his Game 1 explosion, and it seems to be really doing more harm than good for GlobalPort. Of course, he is still their top scoring option, but this series should teach him that he needs to diversify his offensive repertoire a bit more if he is to take this team to the next level.

– For the first time in this series, Stanley Pringle came off the bench to give GlobalPort’s second unit more scoring punch, but what really happened was it allowed Alaska to outscore GlobalPort by 12 points in the first period. This adjustment by coach Pido clearly didn’t work out the way he hoped, and we shouldn’t be surprised if Pringle returns to the starting five in Game 5. His numbers pretty much stayed the same, but taking him out really took its toll on GlobalPort’s starting unit.

Also, Pringle has shot the three-ball terribly in this series. This is a guy who normed more than two triples a game in the elims, so he will need to rediscover his touch from rainbow country.

“Past couple of games, we’ve been shooting bad, and everybody said they’re coming and they’re going to shoot their shots,” Pringle said. “They’re playing really good defense, but it’s definitely the shooting, we’ve been hitting the whole year and they’re sagging off and we’re not just hitting it right now.” –PBA.Inquirer.net

– The Batang Pier’s weakness in the shaded lane was exploited by Alaska in Game 4, and, strangely enough, so was their transition defense. Alaska repeatedly attacked the basket in Game 4, heavily outscoring GlobalPort in the paint. Alaska also ran and ran and ran, outgunning the supposedly faster Batang Pier in transition. These are certainly two key things the Batang Pier need to address in Game 5, else they kiss their chances good bye.

– In Game 4, Calvin Abueva showed everyone why he’s called The Beast. He was just everywhere doing everything for Alaska. He was scoring, defending, rebounding, even hitting a three. His energy was flowing, and nothing and nobody from GlobalPort could match it. If he puts up big numbers again, it could be an easy win for the Aces in Game 5.

– One reason ALA was able to run away early against GLO was the hot shooting of guys like Dondon Hotiveros and RJ Jazul. They combined for 7 of ALA’s 12 threes in Game 4, and they will certainly continue to be vital cogs for the Aces moving forward. Needless to say, if ALA’s shooters frequently find the bottom of the net, it could be an early good night for GLO in Game 5.

– It’s not hard to see why ALA has won 3 straight against GlobalPort. It’s all about the Aces’ efficiency. They have been awesome on both ends of the floor, using great defense to stifle GlobalPort’s explosive offensive weapons, and utilizing sharp execution on offense to run up the scores. It’s that kind of efficiency that the Aces need to have again as they try to close this one out in Game 5.

Despite this, Alaska still cannot underestimate the Batang Pier, who can really heat up very quickly.

– Alaska allowed GlobalPort to shoot 47% from the field

– Alaska has allowed GlobalPort to shoot only 33.9% from the field

– Calvin Abueva is so good that GlobalPort will need the combined powers of Anthony Semerad and Keith Jensen to even have the tiniest of chances at stopping the Beast. In the pivotal Game 5, the pressure will be on Abueva to deliver big time again, while the pressure will be on Semerad and Jensen to try their best at stopping the Gilas 3.0 wingman. That’s easier said than done, of course, as Abueva has amazing motor, and he has bottomless energy. Still, if Semerad and Jensen can muster enough effort and with a little bit of luck, they may just limit Abueva’s productivity.