Aces look to finish off Batang Pier in Game 5 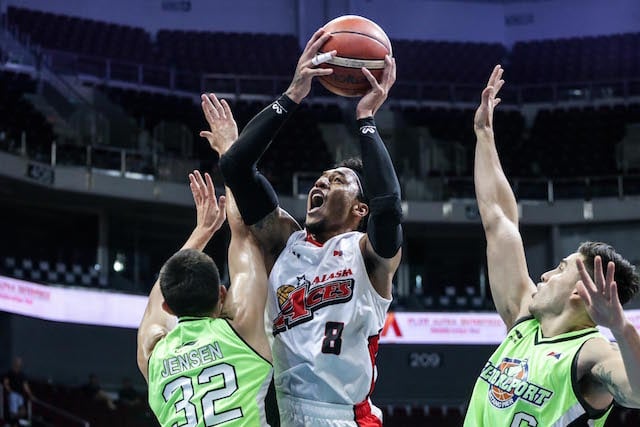 Alaska seeks to put an end on Globalport’s breakthrough run and nurture its own bid for a first crownin three years as the Aces go for the kill versus the beleaguered Batang Pier in Game 5 of their Smart Bro PBA Philippine Cup Final Four face-off at the Smart Araneta Coliseum Tuesday.

Enjoying virtually everything in their favor, the Aces have no plan of looking back, hoping to finish the Batang Pier the soonest they can.

It could well be via an emphatic four-games-to-one win even as Alaska coach Alex Compton is cautious to count out the coach Pido Jarencio and his troops.

But all indications point to Alaska rolling past Globalport and claiming a berth at a third finals appearance in the last four PBA conferences.

The best Globalport could do probably is to stall Alaska’s finals entry.

“Basta lalaro kami at susubok mag-bounce back until there is a game to be played,” said Globalport main man Terrence Romeo ahead of the 7 p.m. setto.

But again the Batang Pier’s huge problem is how to cope with the Aces’ enormous energy and resolute defense.

The Aces have got Romeo in check from second half of Game Two – a big key in Alaska’s three-game romp after a letdown in the series opener.

Alaska beat Globalport in convincing fashion in each of the last three games, winning by 13 in Game Two, by 24 in Game Three and by 25 on a completely lopsided manner the last time out.

It’s a relentless great team effort keeping the Batang Pier from getting into the groove and finding their touch.

“Nobody on our team is stopping them one-on-one. The times that we got stuck one-on-one, nobody stopped them,” said Compton.

Compton isn’t ruling out a Globalport comeback, saying the Batang Pier can be really explosive if not defended well.