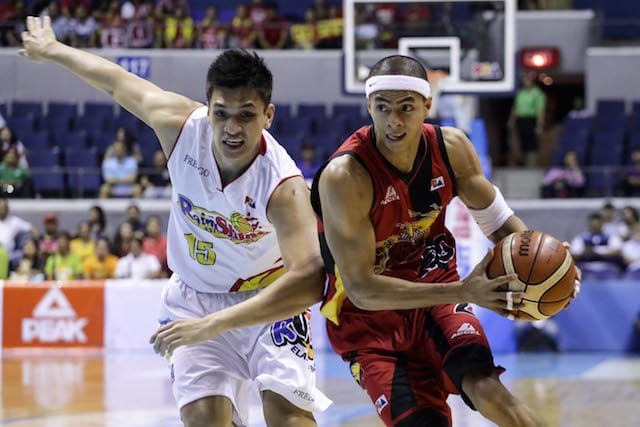 San Miguel Beer is now just one step away from a return trip to the finals.

With June Mar Fajardo collecting 27 points and 12 rebounds and Arwind Santos keying a crucial breakaway the Beermen triumphed over Rain or Shine 103-94 Wednesday to go up 3-2 in their Smart Bro-PBA Philippine Cup semifinals series at the Smart Araneta Coliseum.

Should SMB again prevail in Game 6 set Friday it would go on to the other best-of-seven title duel with early finalist Alaska starting Sunday and reprise their championship meeting last season.

Beermen coach Leo Austria prefers to cross that bridge when his team gets there.

“We have achieved nothing yet with this win,” maintained Austria moments after his team’s followup to its cruising 105-92 win in Game 4.

“This is a series,” reminded Austria. “We need to win another one and to do that we have to continue to play deliberate and methodical.”

The way his charges again avoided an endgame meltdown like they had in a 106-111 loss in Game 3 pleased Austria, however. “We’re starting to pick up,” he said.

Fajardo, the most dominant player in the playoffs with averages of 36.75 points and 17.5 rebounds, was actually limited to just three and two in the final period.

Yet his teammates were there, led by Santos whose back-to-back triples highlighted his eight points during a 20-6 exchange that gave the team its biggest lead of the game at 92-76.

Alex Cabagnot bucked foul trouble to finish with 14 points and a game-high six assists with Santos adding 12 markers, the same total by Marcio Lassiter. Gabby Espinas and Chris Ross each had a series-high nine points with the latter also booming in a triple to spark SMB’s fourth quarter surge.

JR Quinahan came off the bench to score 20 points for Rain or Shine, which drew 15 points from Jeff Chan and 13 points each from Jewel Ponferrada and the returning Jericho Cruz.

The rest of the Elasto Painters struggled, however, and the whole team went 31-for-68 from the floor to SMB’s 40-for-78. The Beermen also went 9-for-28 from beyond the arc, including 4-for-11 in the decisive quarter.

Rain or Shine also scored just two fastbreak points to SMB’s 16 and committed six of its 22 turnovers in the final canto that completely took the wind out of its sails.

Despite all those the E-Painters refused to go down without a fight, hanging on to the Beermen’s coattails for majority of the game and even kept within 68-70 in the third quarter after falling behind by much as 59-67.

After being held to a series-low five points in the opening quarter, Fajardo began showing his lethal form in the second with 10 markers, enabling SMB to go into intermission with a 50-45 lead.

Cabagnot and Espinas were of big help by combining for 14 points while Lassiter accounted for five.

Keeping Rain or Shine in the thick of the fight, aside from Quinahan’s 14 markers and Ponferrada’s 10, was its 12-for-15 clip from the stripe.

The E-Painters’ outside shooting woes have started, however, as they just went 3-for-9 from deep, including just 1-for-5 in the first quarter that the Beermen pounced on to lead by as much as 17-13.