Araña delivers for San Miguel against former team: ‘I’m happy I was able to help’ 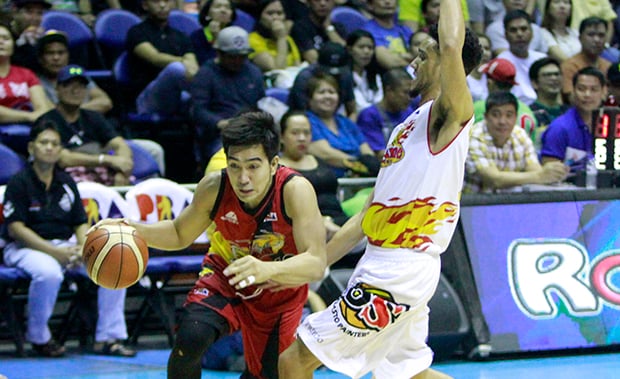 Ryan Araña finally found his stride in a crucial game for Rain or Shine. Only this time, he struck against the Elasto Painters.

Araña came off from the bench for San Miguel and put his former team behind, 2-3, in a best-of-seven semis series as he pitched in eight points to go along five rebounds and three assists.

“I’m happy because the team has waited for this long for me to finally explode,” Araña said Wednesday at Smart Araneta Coliseum as the Beermen one-upped Rain or Shine 103-94. “I’m happy I was able to help the team especially in this Game 5, a game which we really needed to win.”

Araña played for eight years with the Elasto Painters after was drafted in 2007. He was traded to the Beermen just before the start of the PBA Philippine Cup.

Not only did Araña come into his own in Game 5, the whole San Miguel team once more gave two-time MVP June Mar Fajardo his much-needed help in the series.

“We have a bigger chance of winning if the bench helps in scoring and in defense,” Araña said as the supporting cast contributed 29 points. “The players weren’t all that tired.”

Araña said facing his former team is just a part of his job and admitted that he was even waiting for his former head coach Yeng Guiao to shout profanities at him.

“It’s weird, but it’s a job for us, we have to do this,” Araña said. “If there are elbows and shoves, it’s normal in basketball. I was even waiting for coach Yeng to curse at me, but it didn’t happen.”