Guiao: We’re not ready to win a championship 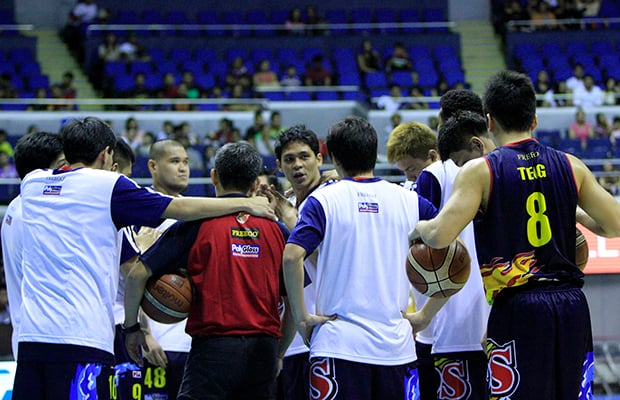 Down 3-2, Rain or Shine’s back was against the wall on Friday as it battled for its life in the PBA Philippine Cup against defending champions San Miguel.

But the Elasto Painters failed to pounce on the absence of injured June Mar Fajardo in the second half as they let the Beermen ride off to yet another finals trip.

“We bungled our chance to make the Finals, we had a break when Fajardo got injured, we were not able to capitalize,” Guiao said after the 90-82 loss in Game 6 Friday. “It’s our fault, we cannot blame anybody. We failed to step up to the occasion, again some of the other games, most of the games, we led them and we failed to keep the lead.”

The Elasto Painters seemed in control of the series in the beginning—they managed to limit Fajardo’s supporting cast and racked up 2 straight victories for a 2-1 lead.

But when the Beermen figured out how to free up Fajardo of the burden of scoring, Rain or Shine couldn’t do anything to stop them as San Miguel rolled to three straight wins to clinch the finals berth.

In game 6, Rain or Shine had a 46-37 lead after the half and then had a chance when Fajardo got injured early in the third quarter but the Beermen still managed to outscore the Elasto Painters, 33-17, in that frame.

Guiao said he wasn’t surprised of the Beermen’s surge after Fajardo’s exit, but he also took notice of how their opponent managed to thwart any of their comeback attempts.

“I’m not really surprised because they have the talent, I’m surprised how we handled it because I just felt they [the players] could handle it easily,” Guiao said. “They could have an easy time when Fajardo was not on the court and even with the lead going to San Miguel they probably felt ‘oh we can take the lead anytime, we can chop it down’ but it never happened because they were making points at the right time, they were breaking our momentum.”