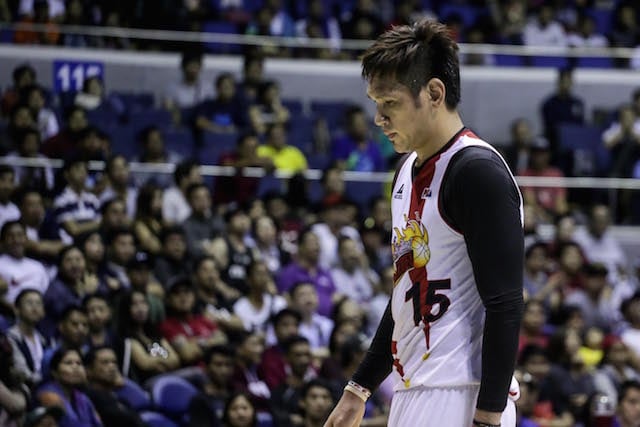 San Miguel Beer head coach Leo Austria is sure that June Mar Fajardo will play in the finals, but as to what game in the best-of-seven the star center will show up remains uncertain.

Fajardo, who is nursing left knee injury, missed Game 1 where the Beermen came up short against the Alaska Aces on Sunday night.

“According to the doctor, he’ll be back in the series, but I don’t know when,” Austria told reporters after the Beermen lost, 100-91. “Sometimes there’s swelling on his left knee then sometimes it will disappear so there’s something wrong, but they told me it’s nothing serious. There’s no need for any surgery.”

Austria hopes Fajardo could return on Tuesday for Game 2 or on Friday for Game 3 in Lucena.

Austria, however, stressed he won’t take the risk in playing Fajardo if he’s not fully recovered yet.

“We’ll see if he can play on Tuesday, but if he’s not 100 percent I don’t want him to play because it might aggravate his injury,” Austria said.

The reigning back-to-back MVP injured his left knee on Friday in Game 6 of the semifinals against Rain or Shine during a rebound play against the Painters’ Jireh Ibañes.

“I talked to him this morning, and he said, he could hardly walk and he doesn’t want to aggravate the swelling on his knee. So I told him don’t force it if you can’t because what’s important is his speedy recovery.”

Minus Fajardo, the Beermen nearly pulled off the upset before costly turnovers down the stretch allowed the Aces to complete their comeback from 12 points down in the fourth quarter.