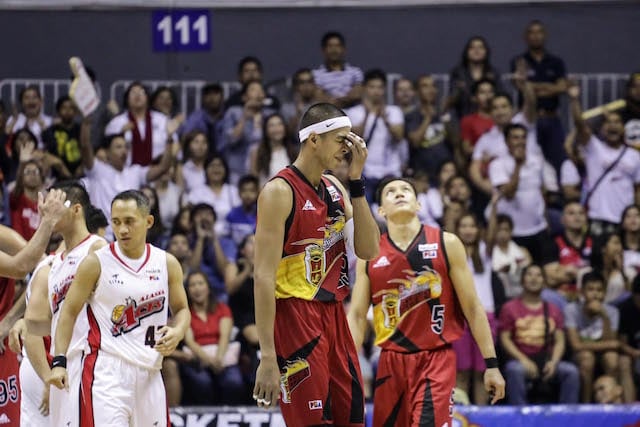 San Miguel Beer didn’t seem to have missed June Mar Fajardo after nearly pulling an upset against Alaska in Game 1 of the 2016 PBA Philippine Cup Finals.

The Beermen led and were very much in it for the most part of the game until the last two minutes when the Aces went on a run to escape with a 100-91 win.
The numbers, however, showed how big of a blow the absence of Fajardo was for San Miguel.
“If you look at the stats it was hard for us to win,” said SMB head coach Leo Austria. “But even though we had a hard time, we had a chance to win.”
“We were out-rebounded by 20 and perhaps we’re missing June Mar, but I’m still happy with the way the team performed tonight.”
Fajardo, who is sidelined due to a left knee injury, is coming off a stellar semifinals showing where he averaged 34.8 points, 16.4 rebounds and 3.2 blocks against Rain or Shine.
And in the only other time the Beermen and the Aces met apart from Sunday’s Game 1, the reigning back-to-back MVP had one of the best games of his career when he posted 43 points and 20 rebounds back in the elimination round last month.
Without Fajardo, the Beermen recorded their all-time lowest rebounding output with 28, which is also the fewest this conference, as per the league’s head statistician Fidel Mangonon.
Apart from its poor rebounding effort, Austria also lamented his team’s turnovers down the stretch.
“We had a good chance of winning, but our turnovers killed us. I think next game we should do better in taking care of the ball if not it will be 2-0 for us,” said Austria, whose team gave up 23 second-chance points and 24 off their 18 turnovers.
ADVERTISEMENT
FEATURED STORIES
Read Next
Austria taking wait-and-see approach on Fajardo
EDITORS' PICK
Smart launches GIGA Pro with bigger and better data for the new normal
Abu Sayyaf leader Susukan handed over to police; PNP chief thanks Misuari
Boost your productivity with the new ASUS ZenBook 13 UX325 and ASUS Zenbook UX425
NBI confirms death of ex-Wirecard exec
Water remains our saving grace right now
PH COVID-19 caseload shoots up to 147,526 with 4,002 new cases
MOST READ
Korina Sanchez reveals dating Fernando Carillo — and not asking money from husband Mar Roxas
PH military unaware Abu Sayyaf leader Susukan was in Davao City, Lorenzana says
Palace: Metro Manila shifting to MGCQ a ‘remote possibility’
PLDT assures probe on contractors disconnecting Fibr customers for new applicants
Don't miss out on the latest news and information.