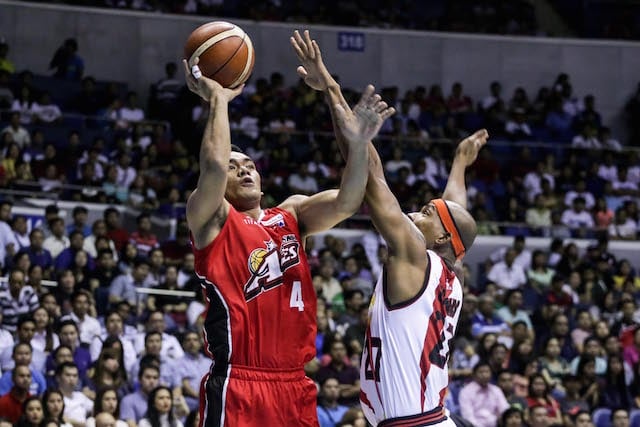 Alaska Milk played tough every inch of the game as in Game One and beat out San Miguel Beer in a helter-skelter finish, squeezing out an 83-80 win for a 2-0 lead in the Smart Bro PBA Philippine Cup best-of-seven finals at the Smart Araneta Coliseum Tuesday night.

Dondon Hontiveros and Vic Manuel made the marginal free throws in the close win, a crucial follow-up in their come-from-behind 100-91 victory in the series opener Sunday.

The Beermen once again put up a tough fight in the continued absence of injury-hit star Junmar Fajardo only to run smack at endgame, going scoreless in the last 1:50 of play.

San Miguel didn’t score a basket again after Ronald Tubid drained a trey to tie the count at 80-all.

Alaska goes for the pivotal 3-0 series lead Friday over at the Quezon Convention Center in Lucena.

Whether because of a tweaked starting unit or whatever, the Aces started a lot stronger than the previous game, erecting an early double-digit spread at 21-9.

The Aces set the pace all throughout until Alex Cabagnot hit a good rhythm and fueled a run that forged a 55-all tie late in the third period.

The two teams then engaged in a close battle to the finish.

Inserted in the starting lineup in this game, Cyrus Baguio and Calvin Abueva buckled down to work right away with Vic Manuel staying as an energy source coming off the bench.

Manuel was the lone player from both sides who produced a double-digit output in the first half with 12 points on a perfect 6-of-6 field clip.

Cabagnot and Marcio Lassiter led the Beermen with nine apiece in the first half, with a booming trey by the former making it 36-39 in the dying seconds of the second quarter.

The Aces beat the Beermen, 18-10, on points inside the paint in the first half even as Sonny Thoss got into foul-trouble situation early, picking a fourth foul in the 6:15 mark of the second period.