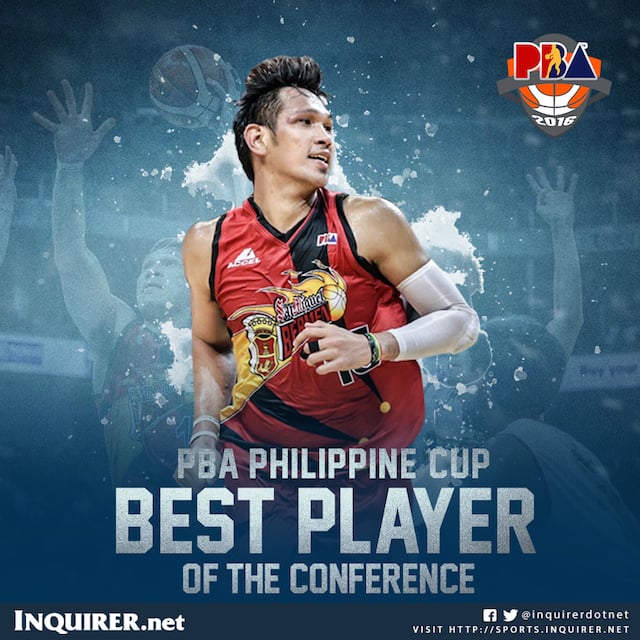 JUNE Mar Fajardo missed out on the chance to help San Miguel Beer retain a cherished crown and now has to console himself with a record-setting plum.

The Beermen’s do-it-all center copped a record third straight Best Player of the Conference award in the Smart Bro-PBA Philippine Cup Sunday in the awarding ceremonies prior to Game 4 of the finals between his team and the Alaska Aces at the PhilSports Arena.

Fajardo garnered a total 1,407 points for topping the statistics as well as getting the nod from representatives of the teams, PBA Commissioner’s Office and media to handily beat Greg Slaughter of Barangay Ginebra, who culled only 803 points.

As a result, Fajardo, who turned 26 just Nov. 27, thus overtook Nelson Asaytono as the player with the most consecutive BPC awards. Asaytono won the award in 1997 and ’98, coincidentally while with SMB.

The award also gave the 6-foot-10, 256-lb Cebuano the inside track yet again for the season Most Valuable Player trophy.

Fajardo maintained he would gladly trade his latest award for the opportunity to see action for SMB in the finals where the Beermen are staring at a 0-3 deficit in the best-of-seven going to last night’s game.

Fajardo has been sidelined by the left knee injury he suffered in the third quarter of the sixth and deciding game of the semifinals against Rain or Shine last Jan. 15.

Prior to the injury, which limited him to just 14 points and 12 rebounds, Fajardo was averaging a league-high 34.8 points, 16.4 rebounds and 2.7 blocks in the semis.

Fajardo now plans to use his sidelining to work extra hard in the mid-season Commissioner’s Cup, which starts on Feb. 10, where the Beermen wound up ninth last year.