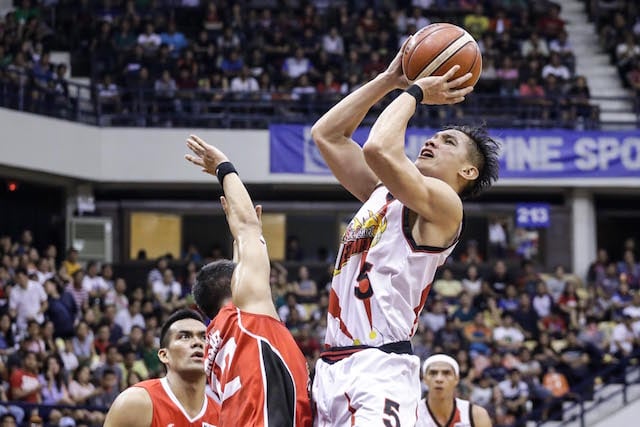 The Beermen bungled a chance at a stirring win in regulation play but lived on in extension play, pulling through just the same to force a Game Five in the best-of-seven series.

The Aces, however, stayed in full control with a 3-1 lead. They take a second shot at closing out the series Wednesday over at the Smart Araneta Coliseum.

Game Four was a complete reversal of Games Two and Three with the Beermen taking their turn to outplay the Aces in gripping duel at endgame this time.

The Beermen gallantly fought back from a 13-point deficit in the fourth quarter, zooming ahead in the closing seconds.

The Aces forced overtime on a buzzer-beating trey by Cyrus Baguio, but the Beermen never ran out of heroes in OT.

“This is what we’re waiting more. We gained the breaks this time,” said SMB coach Leo Austria.

SMB played catch-up basketball almost throughout, groping for form in the first half.

Vic Manuel, Dondon Hontiveros and Jvee Casio all put in double-figure outputs as the Aces set the pace early and headed to the halftime huddle carrying a 49-43 lead.

The Beermen took the lead, 36-33, shortly midway through the second period before Manuel and Casio came through with clutch shots to restore control for the Aces going into the final half.

Hontiveros came out firing, leading the way as the Aces erected an early double-digit spread at 26-15.

Key stoppages helped SMB get into the game in the second quarter. Alex Cabagnot pulled three steals, including one in the 8:26mark that made him the newest member of the league’s 500-steal plateau.