Fajardo will play if there’s a Game 7, says Austria 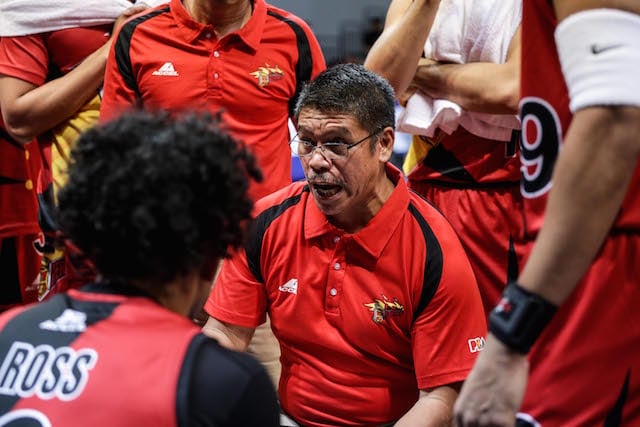 San Miguel Beer head coach Leo Austria was finally precise on the date when his star center June Mar Fajardo could make his return from injury.

Austria specified that Fajardo, who has missed four games due to a left knee injury, will return on Feb. 3 — that’s if the Beermen will continue to survive against the Alaska Aces without their best player.

“Before the game, I told the players, ‘give us a Game 7 and he will play,” Austria told reporters after San Miguel Beer outlasted Alaska, 110-104, in overtime in Game 4 of their best-of-seven finals series Sunday night.

Fajardo showed positive signs on Sunday when he appeared in the finals for the first time to accept his fourth Best Player of the Conference award without crutches and animately support his team on the bench.

“Maganda yung progress sa kanyang knee at nakakalakad na siya (His knee is progressing well and he can walk on his own),” said Austria.

“February 3 is enough time. He wants to play and I’m the only one preventing him to practice because he’s the future of the PBA, Philippine basketball, of Gilas, of San Miguel, and I don’t want to aggravate his injury.”

No team in the PBA has come back and win after falling 0-3 in a best-of-seven series. But after finally winning one after dropping three close games, Austria is confident his team is capable of winning more.

“If the players that played well in the first three games will once again play well, I think we have a good chance,” said Austria, who draw five players in double-digit scoring led by Marcio Lassiter’s conference-high 26 points and Gabby Espinas’ 21 points and 14 rebounds off the bench.