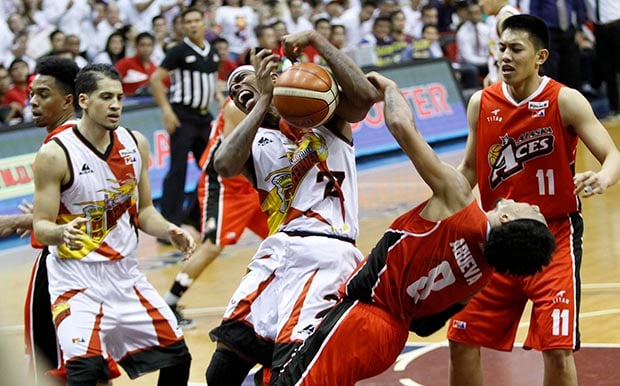 The Alaska head coach has been telling his players that nothing will come easy in their pursuit for a championship especially with a champion team like San Miguel standing in their way and the Aces were reminded of it in Game 4 of the 2016 PBA Philippine Cup Finals.

“I said it wouldn’t be easy, and San Miguel showed what I thought of their character tonight. They fought hard,” Compton told reporters following the Aces’ 110-104 loss to the Beermen in overtime in a game where they squandered an 11-point lead late in regulation.

Compton was clearly disappointed with how his team failed to close out San Miguel when it had the chance — up 93-82 with only 3:30 left — but he also praised the Beermen for showing great fortitude and fighting back despite missing their best player in June Mar Fajardo for the fourth straight outing.

“We were up in the fourth, but I don’t think our focus stayed during that time. We gave them too many layups and easy shots. We missed some bunnies too, but it was a testament of their character,” he said. “They played great, they deserved the win.”

“I didn’t sense any laziness from our guys, but I felt some of our guys were gigil (too eager). They were really fired up, which happens sometimes,” said Compton.

The Aces committed 21 turnovers for the game, three of which came in the final three minutes of the overtime period which basically sealed the game for good.

“We can’t keep on turning the ball over like this, and a lot of it is just really us not being smart with the basketball. We got to be better if we want to win on Wednesday,” he said.

“It’s a series. Everybody is talking about sweep. It was a tough team with a bunch of winners that is well-coached. It’s not easy to sweep anybody,” Compton said. “We’re up 3-1. I think in the Finals, the pressure is on both teams. I can’t imagine their coaches or Mr. Robert Non saying, ‘Ok lang matalo (It’s okay to lose).’ I don’t think the winningest organization in PBA history says, ‘Okay lang matalo. Na-injure naman si June Mar (It’s okay to lose because June Mar’s injured).’ Hindi naman ganun yun (That’s not how it works). I think the pressure is on both of us.”

“I just want to come out of this championship series with a title. It’s not going to be easy. Now, they have two days of rest. The way I would like to work our guys, I wish we could play tomorrow morning, but we play on Wednesday so a good coach has a time to prepare them, get their veteran players rested. We got to comeback and be better.”