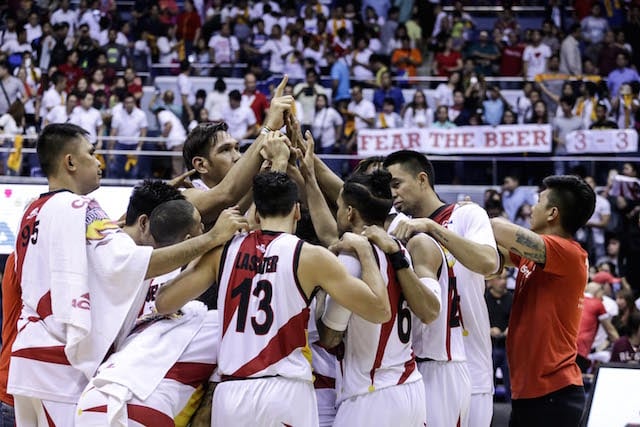 Arwind Santos will be the first to admit that no one from the San Miguel Beermen, who had fallen three games to none, expected the 2016 Smart Bro PBA Philippine Cup Finals series to go the distance.

But after San Miguel’s 100-89 victory over Alaska on Friday night to force a Game 7, Santos and the rest of the Beermen want nothing but to complete their historic comeback.

Personally, it has also been a redemption of sorts for the 2013 PBA MVP, who had been criticized for his lackluster showing in the first three losses.

“He’s a marked man. (Alaska) doesn’t want Arwind to be open in the perimeter. Of course, at the time, we don’t have June Mar (Fajardo) and he’s struggling. But with June Mar now, it poses a lot of problems for them and it has really helped our team, especially Arwind,” said SMB head coach Leo Austria.

For his part, Santos also said that the biggest change was the Beermen’s mindset in the clutch.

But all of that is in the past now, and Santos just wants to continue the roll his team is having for San Miguel to defend its Philippine Cup title.