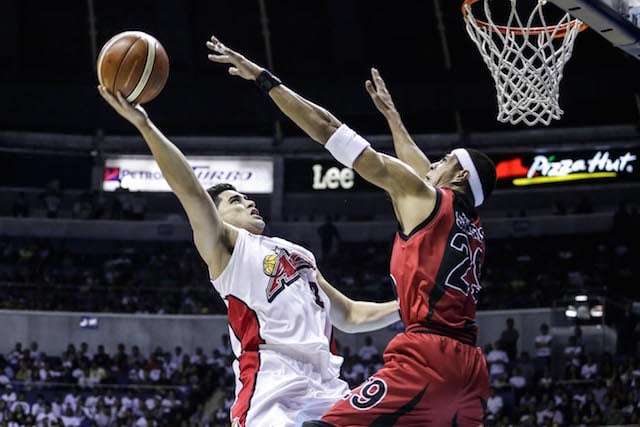 After a four-day breather, Alaska and San Miguel Beer clash for one last time in a Game 7 like no other where the winner claims a special place in PBA history.

For either team in this particular championship series, a loss would be too much to bear.

A sellout crowd is expected on Wednesday at 7 p.m. at Mall of Asia Arena as the Aces and the Beermen fight for all the marbles and put an emphatic climax to their 2016 Smart Bro PBA Philippine Cup best-of-seven titular series that has seen one wild momentum shift.

The Beermen ride the momentum of a searing three-game run going to the winner-take-all match.

The Aces, winning the first three games before bungling three cracks at wrapping up the series, hope to change the course of history in the final game.

If ever, San Miguel goes down as the first team in PBA history to win a crown after trailing 0-3. Or Alaska becomes the first franchise to salvage the championship in Game 7 after blowing away a 3-0 lead.

Usually, Game 7 is really a toss-up. As they say, players live for these moments, with the very existence of teams defined by these battles. They also say previous stats and results are thrown out of the window for this game.

But for this one, it’s hard to ignore the momentum, fire and confidence the Beermen gathered on a run inspired by the comeback of 6-foot-10 behemoth June Mar Fajardo.

Consider too the extra recovery period enjoyed by the dominant SMB big man on the four-day break after Friday’s Game 6.

“June Mar will be able to recover. He’s only about 70 percent (of his old playing condition). He may be 85-90 percent by Game 7. So it’s good for us,” said SMB coach Leo Austria moments after Game 6.

With a brace to support his injured left knee, Fajardo returned to play some minutes in Games 5 and 6, helping the Beermen extend the series to a winner-take-all setto.

He chipped in 13 points and four rebounds in 16 minutes and 28 seconds of action in their 86-73 overtime triumph in Game 5, then put in 16 markers, seven boards, two steals, one block and one assist against two turnovers in 22:10minutes of play in their 100-89 triumph Friday night.

There’s no doubt Fajardo can be so dominant if in tiptop shape. And the better Fajardo becomes the better his teammates go with him.

But the Aces have one good trait that could serve them well in this game – defiance.

“I get excited about this stuff as I have a hard head. I’m a believer and I firmly believe in my guys. My guys are such a great group to coach, and I hope I can deliver for them and we play a great game,” said Compton.

“We’ve got to play. We have no excuse for the hole we’re in. It’s a one-game toss-up, we’ll see what happens,” he added.

The two teams also fought in a deciding Game 7 in the all-Filipino Finals last season with the Beermen barely pulling through on a last-second shot by Arwind Santos.

Redemption may be the other thing in the minds of the Aces.

The Aces are eyeing their 15th league championship and first PH Cup since 2000 while the Beermen are gunning for back-to-back PH Cup championships and their 22nd overall.