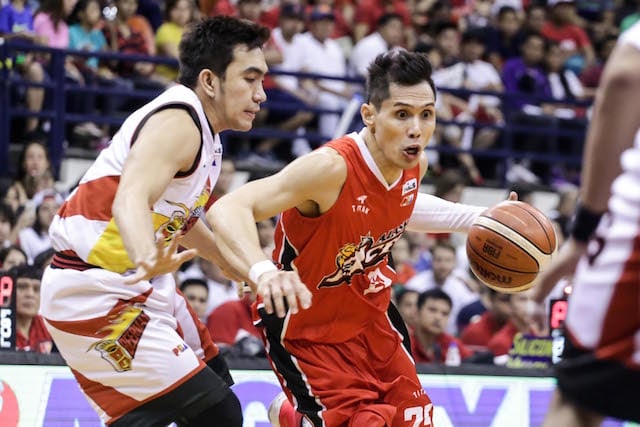 Dondon Hontiveros has won a lot of games and earned a handful of awards and trophies throughout his 15-year PBA career. But despite all he has done, he’s never experienced what its like to win the most prestigious of them all.

Hontiveros came so close to having his own Philippine Cup championship but it slipped from his fingertips when Alaska lost to San Miguel Beer on a game winner in a Game 7 last year.

Hontiveros and the Aces are back in a familiar situation. Another Game 7 and the same Beermen standing in their way.

“You’re always motivated to win, especially All-Filipino Cup,” he said after the Aces blew a 0-3 series deficit with the Beermen tying it at 3-3.

“We have lots of opportunities, but we weren’t able to finish it. The hardest part is closing it out. Their backs are against the wall and you have to admire them. We have our backs against the wall now for the first time. We have to leave all the stats and go out and play,” Hontiveros added.

This will be Hontiveros’ fourth chance to capture an All-Filipino title, Two of those times were when he was still with the Beermen.

“Any player who has a chance to win an All-Filipino Cup has all the adjectives to describe it. Yung tamis, yung sarap. But you have to go through hell first and different things before you can get it,” he said. “Personally, be it against San Miguel or other team, it will always be sweet.”

It may be the calm before the storm, but Hontiveros believes Alaska has what it takes to get the job done.

San Miguel is shooting for history to become the only team to win from 0-3 down in a best-of-seven series, but that’s the least of the Aces’ concerns.

“Nakikita ko naman sa mga teammates ko na they’re ready. We’re down for a while, but we’re upbeat. We have each other to make it special.”