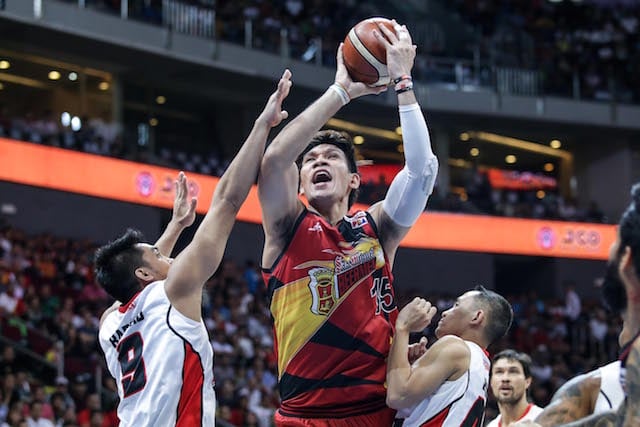 The Beermen wrote a new chapter in PBA history and redefined their legacy with a 96-89 win over the Alaska Milk Aces Wednesday night that completed their epic come-from-behind triumph in the Smart Bro PBA Philippine Cup titular series.

June Mar Fajardo and his teammates beat a terribly outclassed Alaska side in the deciding Game 7 and thus became the first team in league history to win a championship from 0-3 down.

A roaring crowd of nearly 24,000 at the MOA Arena stood as witness as the Beermen claimed the winner-take-all match and reaffirmed their stature as the league’s premier team.

From a close 43-38 halftime lead, the Beermen mounted a fiery breakaway in the third quarter and went on to repeat their Game Seven conquest of the same rival in the same tourney last season.

San Miguel bagged a sixth all-Filipino crown in all, a third championship in the last four conferences and 22nd overall.

That was after the Beermen had been written off by not a few as they fell behind in the series 0-3.

In Game 7, the Beermen asserted themselves right away.

In a curious move, the Aces called three successive timeouts just a second into the game after Arwind Santos was called for a jump-ball violation.

But the Alaska trick didn’t do any good to the team with the Aces struggling with a mere 31-percent shooting in the first half.

Chris Ross went 3-of-4 from the three-point land and collected 11 points in all plus three rebounds and two assists against three errors with Fajardo chipping in six markers and eight rebounds as the Beermen set the pace almost throughout in the opening half.

Yancy de Ocampo broke the ice with a three-pointer then the Aces spurted ahead at 8-5 before Santos, Ross, Fajardo and Ronald Tubid teamed up in a 13-to-nothing run to give the Beermen their first double-digit spread at 18-8.