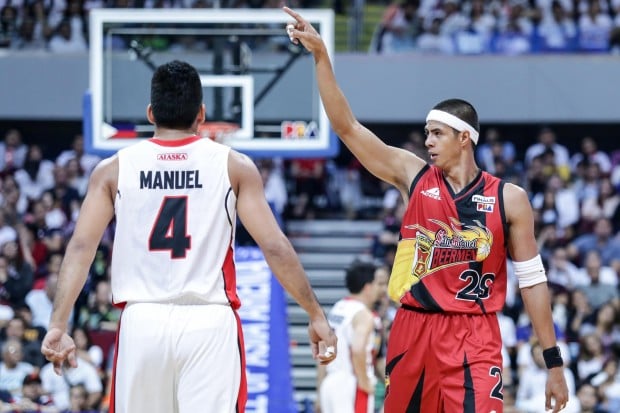 Manuel turns his back as Arwind Santos celebrates a point. Photo by Tristan Tamayo/INQUIRER.net

In the middle of Alaska’s “we not me” mantra, one name stood out as the best of the group in the PBA Philippine Cup Finals, and it read Vic Manuel.

Through Games 1 to 3, it was the “Muscle Man” who steered Alaska as the Aces looked to topple the mighty San Miguel Beermen but fate has a twisted sense of humor and took away Manuel’s chance of glory.

What could have been a potential Finals MVP-worthy performance for Manuel turned into dust as the Beermen took Games 4 through 7 in the so-called “Beeracle” leaving the Alaska forward shaking his head, but looking ahead.

Manuel was averaging 20.83 points per game in the first six games of the series but he faced a devastating free fall when it mattered most scoring only three points in the seventh.

Making matters worse for the big man was a sprained ankle he got in the first quarter of Game 7, limiting his movement.