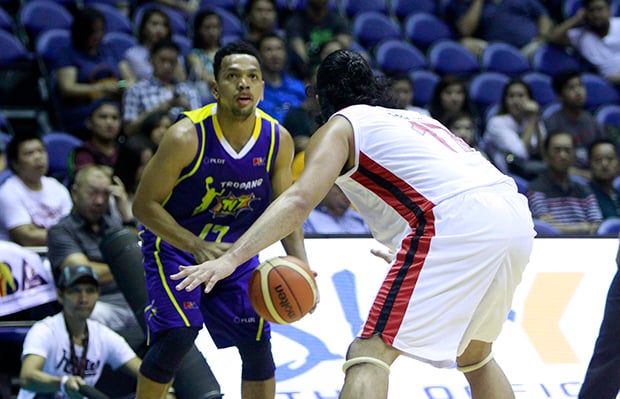 Without an import and a prized rookie defending champion Tropang TNT looked like easy picking for Blackwater.

With Jayson Castro and the comebacking Ranidel de Ocampo doing the most damage the Texters pulled off a 108-102 victory over the Elite Wednesday at the start of the PBA Commissioner’s Cup at the Smart Araneta Coliseum.

Castro scored 22 points, capped by a dagger of a 3 in the waning seconds, while the comebacking De Ocampo added 20 in helping make up for the absence of import Ivan Johnson.

Johnson was serving out a one-game suspension he incurred, along with a P50,000 fine, for instigating a brawl with Blackwater’s JP Erram and Frank Golla in a tuneup game last Jan. 30.

Aside from Johnson TNT also missed the services of Troy Rosario, who averaged 15.5 points and 6.4 rebounds in the Philippine Cup but injured his shoulder in the season-opening tourney’s quarterfinals match against Rain or Shine.

Those absences were felt, but only a little by TNT as it again foiled Blackwater’s bid to notch a conference-opening game for the very first time.

Carlo Lastimosa scored a career-high 39 points and three other local teammates contributed at least 11 points each but even those could not atone for import MJ Rhett’s so-so debut of 16 points and seven rebounds.

“I just have to adjust with the rules here, because you can’t use an arm-bar or play more physical, which is what I’m used to in the States,” said the 23-year-old, whose only other previous overseas stint since going undrafted in last year’s NBA Draft was in Latvia.

“But I’ll adjust and do better,” he added.

The former Ole Miss forward-center did come alive in the second half with 12 of his points and joined hands with Lastimosa and Art dela Cruz in bringing the Elite back from a 76-90 deficit.

Lastimosa sparked and fueled a 12-3 run with eight of his 14 fourth quarter points and Rhett capped it with two charities as Blackwater crept to within 102-103, still 1:11 left.

But TNT ran a well-executed play off a timeout and had Castro booming in his trey that gave the Texters more breathing room.

The victory was shaped for good following a Lastimosa miss and a Dela Cruz turnover with Larry Fonacier sealing the scoring with a fastbreak layup.

Lastimosa’s performance was the best by a local in the first game of an import-spiked conference since Allan Caidic exploded for 43 for Presto in the 1992 First Conference. All for naught.

Ryan Reyes and Moala Tautuaa added 16 points each for TNT which has some time to further hone its plays before next taking on Meralco on Saturday.

Reil Cervantes added 15 points while Mike Cortez and Dela Cruz chipped in at least 11 points each for Blackwater, which kept plodding on despite Rhett’s mediocre performance.

Mainly due to Tautuaa scattering 10 points in the third period TNT threatened to break the game wide open by taking a 78-66 lead and De Ocampo’s triple just seconds into the final canto made it an 86-72 count.