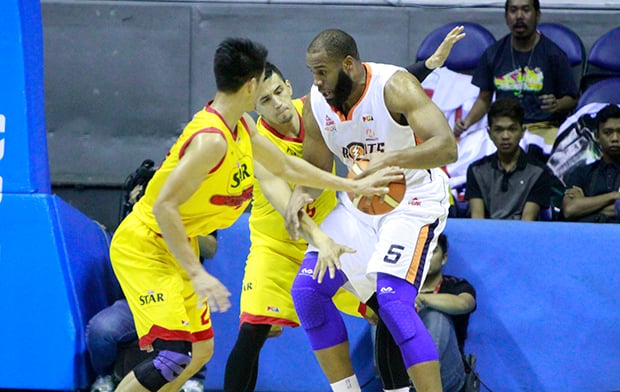 Without the benefit of a single practice session with Meralco, Arinze Onuaku made a solid debut with the team, leading the Bolts to a 90-86 drubbing of the Star Hotshots on opening night of the  PBA Commissioner’s Cup at the Smart Araneta Coliseum.

On the floor with the Bolts for the first time, Onuaku delivered more than what’s asked of him, helping Meralco to a winning start in the mid-season tournament coming from a poor showing in the all-Filipino Cup.

The three-time NBA D-League All-Star made good use of his wide body as he outperformed former PBA Best Import awardee Denzel Bowles, coming through with 25 points and 22 rebounds.

Onuaku himself clinched their win a semi-hook off Bowles making it 90-86 with 17.4 ticks left.

“It’s a whirlwind of a week for us. We brought in Malcolm Thomas who we thought is a good player. But he hurt his knee. We had to find a replacement and we’re fortunate Onuaku is available and willing to fly. He flew in only (Tuesday night),” Black also said.

Chris Newsome, Cliff Hodge and Baser Amer were of big help, each one contributing double-digit output as Meralco repeated against the only team they beat in the Philippine Cup.

Trailing by as many as 14 in the opening quarter, the Bolts went to Onuaku, Kelly Nabong, Amer and Newsome as they rallied to within one, 42-43, at the half.

Amer and Newsome combined for 3-of-3 clip from beyond the arc to highlight an attack that shoved the Bolts earlier to within two at 34-36.

The Hotshots jumped the gun on the Bolts, seizing control early at 22-8 and leading throughout the opening half.

Nabong canned in two foul shots to give Meralco its first taste of the lead at 46-45 early in the third period.

Towards the end of the third, Gary David found his range, draining a trey, a tough fall-away shot and two charities as Meralco carried a 67-64 lead into the final quarter.