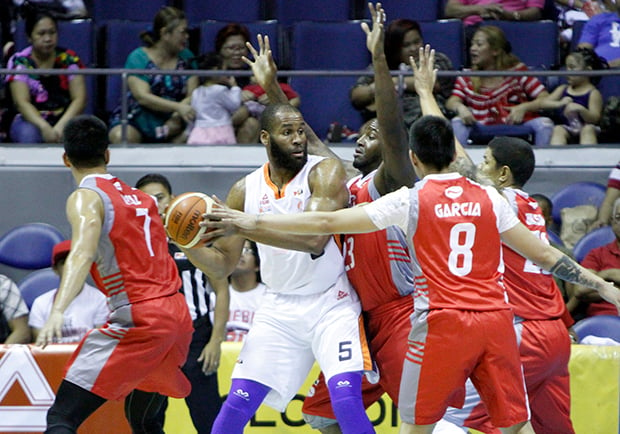 Meralco‘s defense came to the fore in the endgame, resulting in a 90-87 escape over Phoenix Sunday that kept the unbeaten Bolts firmly on top of the 2016 PBA Commissioner’s Cup at the Smart Araneta Coliseum.

Also helping the Bolts rack up a 4-0 win-loss slate, just one short of the franchise –best 5-0 record they started with in last season’s edition of the same tournament, were the cuffs applied on Fuel Masters top gunners RR Garcia and JC Intal.

Garcia looked well on his way to another big night when he scored 11 points right in the opening quarter. But he was held to just a 1-for-14 field shooting the rest of the way and finished with 15 points, 18 off those he scored in a 118-106 win over NLEX last week.

Intal never really got going and came up with only two points, 15 below the ones he notched in helping the team formerly known as Barako Bull get off to a rousing start in the mid-season tourney.

“I’m really proud of my team,” said Meralco coach Norman Black. “We were able to win this game on a night when we couldn’t shoot straight. We couldn’t make our outside shots, we missed those free throws down the stretch. But our defense held up enough for us to win.

“That’s gonna help develop our character in future games, the fact that we don’t have to rely on our offense solely to win games.”

Overall, it is his team’s continued bounce-back from a 1-10 and 12th place windup in the Philippine Cup pleases Black the most, coming as unexpectedly as it does.

“I had no idea we’re going to be 4-0,” admitted Black. “I don’t know what will develop at the start, but we did play eight exhibition games, to get the team to gel, get to know each other because we do have eight new players to start the season with.

“It also helped that Arinze takes care of our weaknesses, which are mostly in rebounding and inside play. I think this record is because of the combination of our import and locals playing well together.

“It’s on me,” he said. “I failed to adjust quickly enough to some of their plays, like ball screens and high pick and rolls.”

In all, the Fuelmasters made just eight of 38 three-point shots, nine short of the ones they boomed in against the Road Warriors, and missed 10 of 27 free throw attempts and those were seen by Banal as silver linings.

“Despite the discrepancies, we lost by only three,” Banal pointed out.

And Phoenix still had its chances after posting as much as a 42-30 second quarter lead and more so when Meralco’s Anjo Caram and Chris Newsome combined for a total three missed free throws inside the final 12 seconds.

But Garcia even helped Phoenix’s downfall when he issued a pass to Andrew Adeleke off a high pick-and-roll that proved too high and too hard, resulting in Newsome’s charity split that made it 90-87, still 4.2 seconds to go.

“The play was for RR, but I always preach to the players to pass on to the open man,” said Banal.

Out of timeouts, the Fuelmasters were harassed right on their backcourt, resulting in Urbiztondo’s harried and ultimately blocked heave.

Newsome wound up with 16 points, Gary David 10 and Jared Dillinger 10 capped by a dagger of a trey.

The Fuelmasters’ hopes started fading, however, when Dillinger turned an Onuaku offensive rebound into a triple that gave the Bolts the lead for good 89-86.

The win took its toll as Rabeh Al-Hussaini sprained his right ankle after stepping on teammate Ken Bono’s foot during a rebound play in the second quarter.