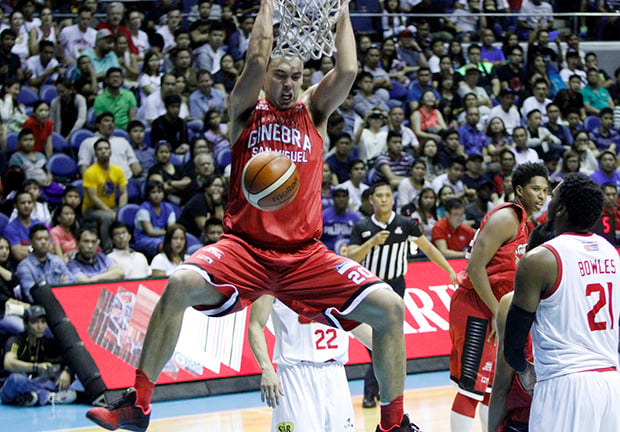 Barangay Ginebra outmaneuvered Star at the finish, and the Gin Kings made it two in a row in the 2016 PBA Commissioner’s Cup with a 92-87 decision over the Hotshots Sunday at the Smart Araneta Coliseum.

Greg Slaughter and LA Tenorio combined in a decisive seven-to-nothing run in the final minute as the Gin Kings scored a follow-up on their initial win over the Rain or Shine Elasto Painters and improved to joint fourth place with the NLEX Road Warriors and the Blackwater Elite at 2-2.

“Both played very well tonight. We dominated early on, then Jason (Webb) made a great adjustment, putting in a big lineup to throw us off balanced in the third,” Cone also said. “The good news was we settled down, we didn’t panic and we worked our way back.”

Mark Barroca did a Stephen Curry act in the third quarter, lighting the board with 4-of-4 three-pointers and a total of 14 points to carry the Hotshots ahead at 74-66.

In making his second trey then scoring on a breakaway layup, Barroca forged only the second deadlock in the game at 66-all after the 5-all tie.

Winning on all fronts of the game early on, the Kings opened a first double-digit lead at 42-31 then sat on a 56-48 cushion at the half.

The crowd’s biggest roar during Ginebra’s second-quarter attack went to Aguilar for a thunderous two-handed jam off an alley-oop pass by Jeffers.

Aguilar had had 15 points as against PJ Simon’s 14 by the half.