Tenorio pleased with Ginebra’s ‘defensive win’ but far from satisfied 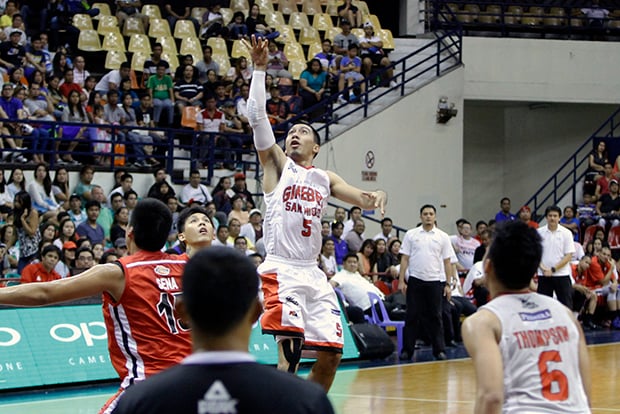 Slowly but surely, Ginebra is turning out to be the quintessential Tim Cone squad.

And it’s not because the Gin Kings have learned how to play the triangle offense, but rather, due to their commitment to playing defense as evidenced by their 89-79 win over the Blackwater Elite on Sunday.

“It’s a defensive win and this is what coach Tim really wants, he wants us to be a defensive team,” said Ginebra point guard LA Tenorio. “That’s what he’s preaching so hopefully, we’ll be consistent on limiting our opponents below their usual average. That’s always our goal.”

Tenorio was a big driving force in Ginebra’s fourth victory in seven games, doing it all with 20 points, eight assists, four rebounds, and a steal.

“I’m just given opportunities with the help of my teammates. They see that I’m open so it’s an opportunity for me.”

Tenorio said it would be better if each game, a different teammate will end up as the game’s best player in the coming games.

“I prefer to see different teammates being named the game’s best player. It would be better for us different players become the team’s hero because that means our team is picking up.”

“Everyone is happy and helping each other. It’s better to be that way, but if the opportunity comes, I always take it and I’m not going to take it for granted.”

Tenorio admits there’s still a lot to be desired.

“I’m still not that happy yet with how the team is running. We still have lapses especially with our team defense,” he said.

“This is a big win for us because it’s been a close race in the standings. I’ll be happy if we make the playoffs and we go all the way to the semis and finals. That’s the time when I can say that our team defense is really there. As of now, we’re in the process of getting there so hopefully, we become consistent.”