Meralco gets back on track, rips Blackwater 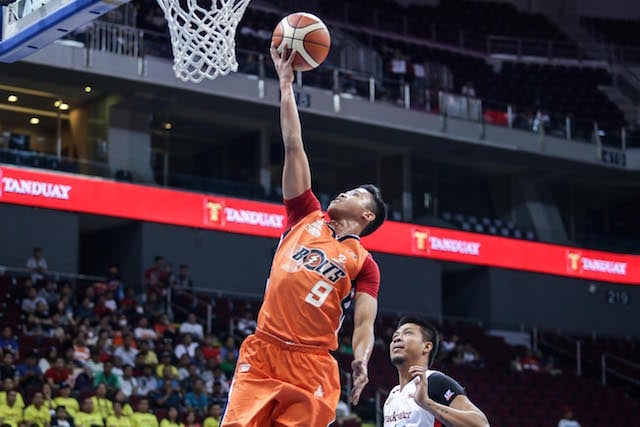 Meralco Bolts’ Baser Amer goes for an uncontested layup during the first half of their game against the Blackwater Elite on Friday, March 18, 2016, at Mall of Asia Arena in Pasay City. Tristan Tamayo/INQUIRER.net

Meralco crushed Blackwater, 106-83, to end a two-game losing skid in the 2016 PBA Commissioner’s Cup Friday at Mall of Asia Arena.

Arinze Onuaku bullied his way to a 27-point, 17-rebound outing to lead the Bolts, who reclaimed the top spot with a half-game lead over idle Alaska at 6-2.

“It was a good overall team effort. Defensively, we were very solid mainly because we were able to matchup with their import. Arinze was able to guard Rhett which gave us an opportunity to really focus on their local players,” Meralco head coach Norman Black told reporters. “Offensively we did a much better job of sharing the basketball and moving the basketball against their zone defense and the game always becomes easier when you make outside shots and we made a lot of them tonight.”

“Our goal right now is just to make the quarterfinals which is the first step. It’s just nice to get a win after two straight losses and get back on the right track again,” said Black, whose team moved one win away from securing a quarterfinals seat.

Baser Amer added 15 points on 4-of-4 shooting from three-point range in 18 minutes off the bench while Ryan Buenafe had 11 points, three rebounds and four assists as 13 players scored for the Bolts in a wire-to-wire victory.

Onuaku shut down the Elite’s import MJ Rhett, who went without a field goal in 39 minutes to finish with only eight points and 10 rebounds.

Carlo Lastimosa led Blackwater, which dropped to 3-5, with 16 points while Mike Cortez tallied 15.