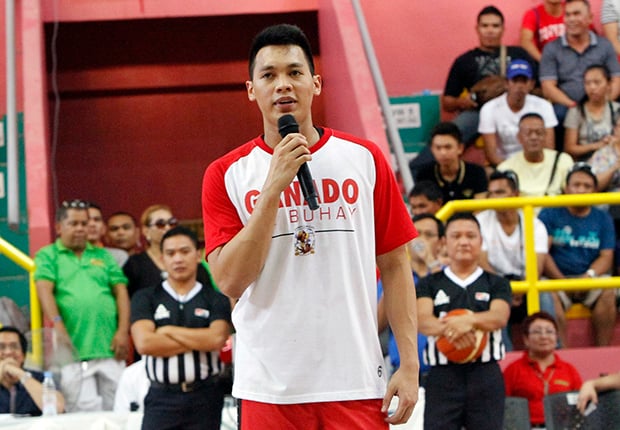 Barangay Ginebra rookie Scottie Thompson speaks at center court before the game to thank his fellow Davaoeños for showing their support. Thompson and the Kings went on to win, 102-101, over the Phoenix Fuel Masters on Saturday, March 19, 2016, at Panabo Multi-Purpose Tourism, Cultural and Sports Center. PBA IMAGES

PANABO CITY – Rookie jitters never hit Scottie Thompson stronger than Saturday when he strut his stuff in front of his fellow Davaoeños.

“This is my first time in a long while to play here in Davao,” he said in Filipino.

Now a pro for Ginebra, Thompson felt the pressure on his shoulders doubled when the Kings played the Phoenix Fuel Masters before a packed crowd here.

And to no one’s surprise, the Digos native got the loudest reaction, with sections of the arena proudly cheering him every time he checks in and takes the ball down court.

“I felt the pressure because the people here really wanted to see me play here,” the one-time NCAA MVP said.

The 22-year-old Thompson did make a good account of himself, tallying six points, two rebounds, and two assists in his 14 minutes on the floor in Ginebra’s pulsating 102-101 victory.

“I didn’t want to force anything. I just want to calm myself down every time,” Thompson said. “The feeling was overwhelming and I felt proud being out there.”