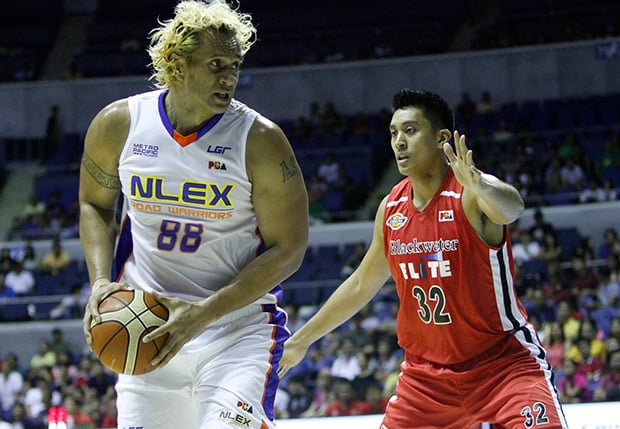 Al Thornton picked the right time to shine the most and powered NLEX to an 88-75 victory over Blackwater on Easter Sunday in the Oppo-PBA Commissioner’s Cup at Smart Araneta Coliseum.

It was all cruise control for NLEX from there as it went on to notch its fourth win against as many losses that moved it into a tie for fifth- to 10th-running spot.

The Road Warriors can now look forward to notching a first-ever two straight wins and enhance their chances of moving on to the quarterfinals of the mid-season tourney should they prevail anew over last-placed GlobalPort on Friday.

“With this win hopefully mabuhay ulit ang chance namin to go into the second round,” said NLEX coach Boyet Fernandez.

“The plan is to make it to the quarterfinals,” added Fernandez. “If you look at our schedule, our last two games are against San Miguel Beer and Alaska. Alam natin playoff teams ang mga iyon. For us, we just have to hurdle GlobalPort and then we’re looking to steal one of our last two games, two better.
“It’s all about consistency. Kasi, in our past games we win big, lose big. Hopefully, matuto kami the last two weeks and sana maging consistent kami as this conference goes on.”
Thornton went into the game averaging 33.3 ppg, but although his scoring dipped his good defense against Blackwater counterpart MJ Rhett, who hauled down 18 rebounds but scored only 14 points and committed seven turnovers, was not lost on Fernandez.

“Al Thornton knows it’s his offense we need, but he played good defense against Rhett,” noted Fernandez.
Asi Taulava, who turned 43 last March 2 shared team scoring honors with 22 points to go with a team-high 15 rebounds while Sean Anthony and Jonas Villanueva chipped in 10 points each.
As a whole, Blackwater made just 27 of 86 field goal attempts and had 18 turnovers, pleasing Fernandez even more.
“It’s really our defense that stepped up today,” said Fernandez.
“Our goal is to limit Blackwater to 90 points or below and we did that, so I’m really happy with our defense,” added Fernandez.
“In our past losses we gave up (107.5) points so in our practices the last two weeks we emphasized playing defense, following our gameplan. Credit our guys for following it.”

Its third straight loss dropped Blackwater to a 3-6 slate and 11th place, in danger of missing out the playoffs anew after realizing its first-ever quarterfinals stint in the season-opening Philippine Cup.
Art dela Cruz led the Elite with 16 points and Reil Cervantes added 11 as usual top scorer Carlo Lastimosa, who went into the game averaging 21.5 ppg, was limited to six in just a little over 14 minutes of action and after launching just eight attempts.
Lastimosa was taken out of the game with Blackwater trailing 46-61, still 4:30 left in the third period, and sat out the rest of the game.

Notwithstanding, the Elite managed to put up their most decent performance of the match with Bambam Gamalinda, Rhett, Dela Cruz and Kyle Pascual joining hands to make it just a 60-66 game heading into the final canto.
Dela Cruz, Pascual and Gamalinda continued their fine play into the fourth with Dela Cruz’s feed resulting in a Gamalinda short stab that brought Blackwater within just two points.
Taulava’s own undergoal shot gave NLEX a four-point cushion before Thornton took over.

The former NBA veteran hit a triple, and then found a cutting Anthony who made it 77-69.

After Anthony scored off his own steal, Thornton put the biggest exclamation of the game with a blow-by off Rhett for a dunk that gave NLEX the 12-point bulge.