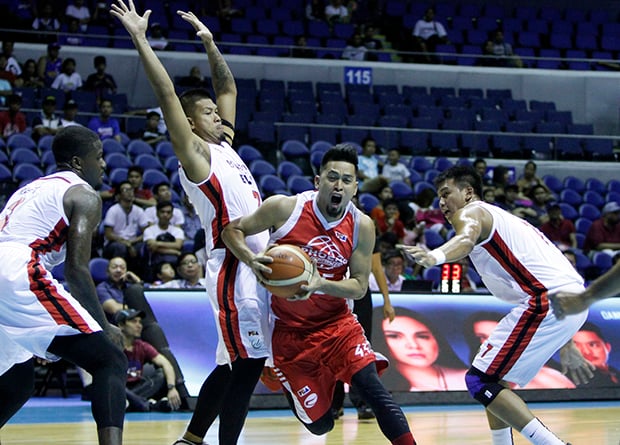 The wringer Phoenix expects to go through later on in the Oppo-PBA Commissioner’s Cup eliminations came early.

The Fuelmasters sure got a taste of that Wednesday, having to go through overtime before hurdling Blackwater 124-120 to stoke their quarterfinals aspirations at the Smart Araneta Coliseum.

Mac Baracael and Kevin Pinkney each scored 21 points and the latter and Chico Lanete hit some big shots down the stretch that ensured Phoenix’s head stayed above water.

In the end, the Fuelmasters emerged with their third win in eight games and although they remained at 10th place the victory, according to coach Koy Banal, should help prepare them in the homestretch of their bid for inclusion among the top eight advancing to the next round.

“It’s hard, but it’s possible,” said Banal, whose team still has to take on Rain or Shine, GlobalPort and San Miguel Beer.

“The goal is to win three out of our last four assignments not only to advance but to have a better chance in the playoffs,” added Banal.

“Who knows? Maybe we’ll even wind up in the middle of the pack which is our primary objective. But if we have to go through the eye of the needle, we’ll go through it and bring everybody with us.”

The loss, its fourth straight and seventh in 10 games overall, practically shut the door on Blackwater’s own bid to advance.

Currently mired at 11th, the Elite still have to face Rain or Shine on April 10.

After scoring just six points in a 75-88 loss to NLEX last Sunday and only two points in the first half of Wednesday’s game, Carlo Lastimosa waxed hot in the second half and OT.

The third year pro scattered the rest of his gamehigh 28 points for the remainder of the game but missed the chance to win the game for Blackwater in the last 1.1 seconds of regulation when he failed to complete a four-point play.

Pinkney also missed the chance to break a 109-all count when his hurried baseline jumper rimmed out.

JP Erram capped an 18-point game with a putback that gave Blackwater its last taste of the lead at 111-109, before Pinkney, Baracael and Willy Wilson combined for eight straight points to give Phoenix a 117-111 spread.

Lastimosa’s five straight points moved the Elite within one, but Lanete’s triple and Pinkney’s tip-in pegged a 122-118 count, still 35 ticks to go.

Mike Cortez canned two charities as Blackwater threatened for the last time at 120-122, but RR Garcia sank two pressure-packed freebies that gave him 18 points and virtually iced the game in the last 9.1 seconds.

Art dela Cruz, MJ Rhett, Cortez and Raphy Reyes wound up with at least 10 points each with the American import also tallying 25 boards.

conferences with the league.

The win also bounced Phoenix back from its sorry 101-102 loss to Ginebra two Saturdays ago, a defeat which Banal said actually helped his team.

It certainly showed in the way the Fuelmasters refused to simply buckle under after blowing as big as a 59-43 lead, keeping its poise in a game that had a total six deadlocks and 13 lead changes.