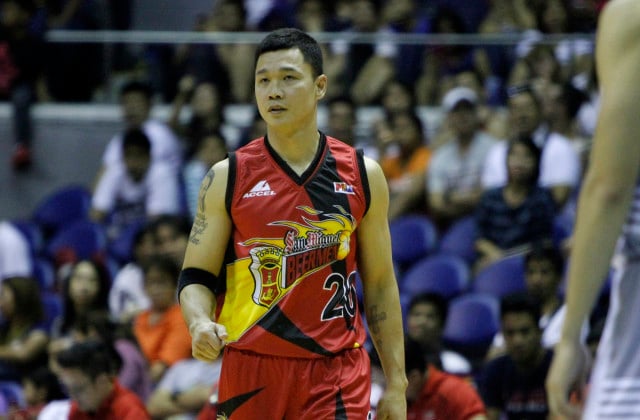 Gary David made his debut for San Miguel Beer on Sunday, April 10, 2016, against Phoenix. PBA IMAGES

Gary David feared his career could be over after Meralco relegated him to the team’s unrestricted free agent slot. Thinking that at 37, it would be hard for him to crack any roster spot in the PBA.

Fortunately for him, he got more than what he asked for as he landed with a powerhouse team in San Miguel.

The 6-foot-2 guard understands he may not get much playing time given that the Beermen are loaded with players holding the same position as him. But being a veteran and knowing the situation that he’s in, David is more than willing to adjust.

David wasn’t supposed to make his debut on Sunday against Phoenix. It wasn’t part of head coach Leo Austria’s plans, but that was before the fans started chanting David’s name similar to that Gilas Pilipinas game in the 2013 Fiba Asia Championship.

And to the cheering fans’ delight, Austria inserted David in the final 1:45 with the Beermen comfortably ahead, 115-102.

David wasted little time as he immediately scored his first points wearing the traditional red and black colors of the Beermen on a baseline reverse.

“Hindi pa nya alam yung sistema namin and he has to learn a lot of things,” he said. “We’re winning because of our system and the players know what to do. It’s obvious na nangangapa pa si Gary. It was a very emotional experience for him but the good thing with Gary is pwede namin siya i-replace for Marcio on off-nights, and at the same time, pwede silang magsabay.”

David just wants to make the most out of the opportunity he’s given.

David has yet to win a title in 12 seasons in the league and being part of San Miguel, which has won three championships in the previous four conferences, puts him closer to reach his ultimate goal.

AI calls for withdrawal of gag order petition vs ABS-CBN

Manny Pacquiao returns with ‘big fight’ either in June or July