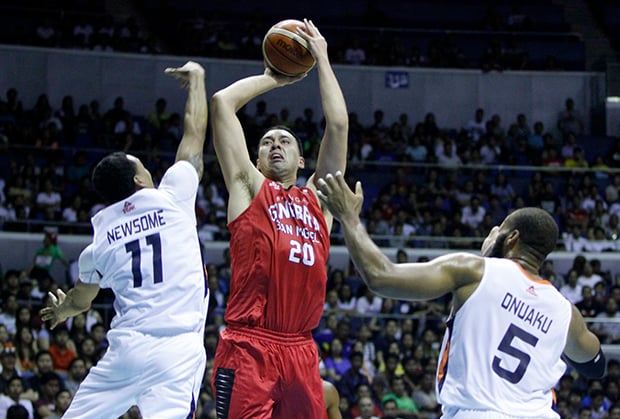 Barangay Ginebra assured itself of at least a spot in the Top Six while keeping a wafer-thin hope of sneaking into second place as the Gin Kings blasted the Meralco Bolts, 103-90, in the penultimate play date of the Oppo PBA Commissioner’s Cup elimination round at the Smart Araneta Coliseum Wednesday.

The Gin Kings stoked the fire of their huge win over the San Miguel Beermen the last time out, pulling off an equally dominant win over the Bolts to end their elims stint with a 7-4 win-loss record.

That slate guarantees Ginebra of at least a place from No. 3 to No . 6, meaning the Gin Kings will figure in best-of-three quarterfinals.

But the Kings can even salvage a playoff crack at No. 2 spot (and its reward of a twice-to-beat incentive in the quarterfinals) in case of a win by Tropang TNT over San Miguel Beer coupled by a victory by NLEX over Alaska Milk Friday.

In that eventuality, TNT, Ginebra, San Miguel and Rain or Shine end up with identical 7-4 slates. In such a case, the Texters and the Kings meet in a playoff for No. 2 on superior quotients.

With an 8-3 closing mark, the Bolts are winding up first or second. Whichever, they’re assured of the coveted advantage in the quarters – a first in franchise history.
Playing with a great sense urgency from the beginning, the Gin Kings led by 19 points early, 35-16, before settling for a 51-39 halftime spread.

Ginebra enjoyed double-digit spreads right in the opening quarter with LA Tenorio, Mark Caguioa and Greg Slaughter getting the team to a good start in the game.

Slaughter and Tenorio both had had double-digit outputs with 15 and 12 points, respectively, as they took the halftime break.

Chris Newsome and Cliff Hodge paced the Bolts with 11 and 10 markers in the first 24 minutes where the two imports were limited to just four apiece.