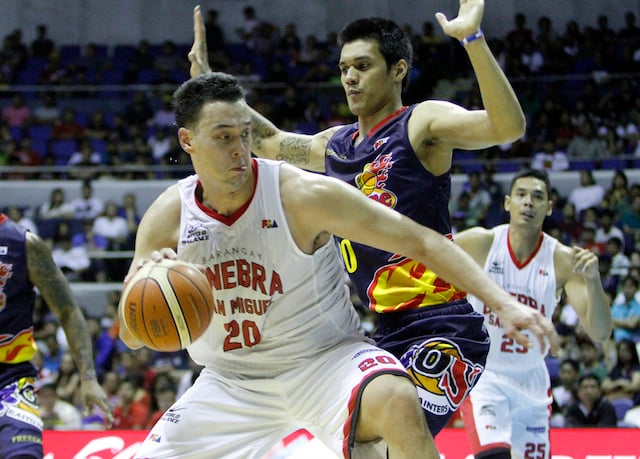 To many, Barangay Ginebra and Rain or Shine make the matchup with the trimmings of a classic showdown from among four pairings in the Oppo PBA Commissioner’s Cup quarterfinals.

Both are not lacking in motivation.

For one, Ginebra is out to ease the pain of its quarterfinals upset by Globalport in the last Philippine Cup while Rain or Shine is determined to stretch to nine conferences its streak of PBA Final Four appearances.

The two teams begin a best-of-three showdown at 5:15 p.m. Sunday at the Cuneta Astrodome.

Ginebra topped Rain or Shine, 103-92, in their elims showdown but that was when the E-Painters were having terrible matchup problems with a small import in Antoine Wright.

Rain or Shine has fixed that concern with its acquisition of Pierre Henderson-Niles.

In their first game with Henderson-Niles in tow, the Elasto Painters blasted the Blackwater Elite, 118-107, to finish the eliminations with a 7-4 win-loss mark – same with the Gin Kings and the Alaska Milk Aces.

The E-Painters have actually won six of their last seven outings. The Kings, meanwhile, set out for the playoffs riding the momentum of four wins in their last five games.

Ginebra closed out its elims stint with emphatic conquests of San Miguel Beer (110-84) and Meralco (103-90) – the playoff top seeds.

Nonetheless, Cone is wary of the E-Painters.

“Coach Yeng is always an incredible challenge. He is such a fierce competitor and that rubs off on his players. They are a tough matchup for us because they play at such a heightened pace. We’ll need to keep our discipline and make sure we play our game, not theirs,” said Cone.

Guiao is excited about their prospect with their new import.

“The potential is there. His upside is good. He’s a solid player. I like his post presence. He’s quick for his size. He’s deceptive as you might think he’s slow, but he’s not,” said Guiao of Henderson-Niles, teammate of Rob Dozier and Shawn Taggart with the Memphis Tigers in US collage ball.

“We will have a match with bigger imports now. Defensively, he’s there to provide that matchup. That’s important. Offensively, the upside is still good. He can score. We just have to put the ball in his hands on his sweet spot,” Guiao added.

In Henderson-Niles, the E-Painters have got somebody to cover the post. The question is who would neutralize Ginebra import Othyus Jeffers.

JR Quinahan, Jericho Cruz and Jeff Chan all average at least 12 points each for the E-Painters.