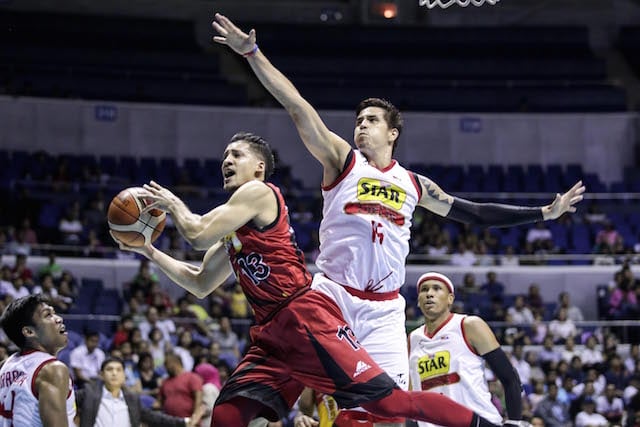 For all its successes, the PBA Commissioner’s Cup has been a waterloo for the San Miguel Beermen.

San Miguel is again on the brink of disaster in the mid-season tourney, with the playoff top seed facing eighth ranked Star in a make-or-break duel in their quarterfinals matchup at Smart Araneta Coliseum Wednesday night.

June Mar Fajardo and company have squandered their twice-to-beat edge on a 99-108 loss Monday night also at the Big Dome.

Coach Leo Austria and his troops have no more room for error as they square off with the resurgent Hotshots in a lone Wednesday match at 7 p.m., determining which team advances to the best-of-five semifinals versus the winner of the Rain or Shine-Barangay Ginebra matchup.

The Beermen hope to finally slay their Commissioner’s Cup jinx so they can move forward and stay in the running for a third straight championship following their title runs in the Governors Cup and in the recent all-Filipino tourney.

San Miguel has never won the mid-season tourney since 2000 – the years in between marked by crushing defeats and downfalls by the league’s most accomplished ball club.

Since the reestablishment of the Commissioner’s Cup in the league’s return to three-conference format in 2010-11, the Beermen have yet to make the Final Four even once.

Ratliffe came through with a huge double-double game with 33 points and 29 rebounds while Maliksi and PJ Simon poured in 23 and 22 points, respectively, as the Star Hotshots foiled the Beermen’s first crack at the semis.

“For as long as there’s still possession, we have a chance. It’s now who’s gonna get lucky on Wednesday,” said Star coach Jason Webb.

The Hotshots lived to fight a KO match as they fought back from double-digit deficits in the first half and pummeled the Beermen down the stretch.

Ratliffe, Simon, Maliksi and Rafi Reavis joined forces in a vicious 14-to-nothing run that steered Star to a 101-89 lead entering the last two minutes of play.

“Super tough game. That was playoff basketball personified. These guys just never gave up and never gave in,” said Webb.

The Hotshots are now looking to repeat their trick in making the 2015 Governors Cup Final Four. They overcame a twice-to-win disadvantage versus the Globalport Batang Pier on the way to the semis then.