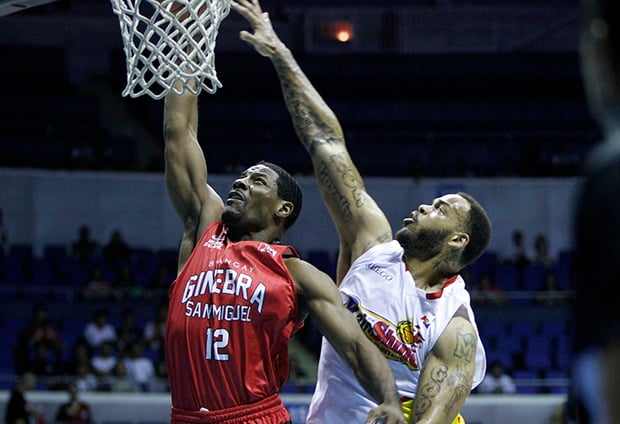 For Othyus Jeffers, it was a case of wrong timing which proved to be Ginebra’s undoing.

“We made strides. We just broke down at the wrong time,” he said, after the Gin Kings got swept in their quarterfinals series against Rain or Shine with a 102-89 defeat on Tuesday.

Still, the outspoken reinforcement was satisfied with the way Ginebra made a run this conference. Unfortunately, the Elasto Painters were the perfect foil as the Gin Kings crumbled in the playoffs.

“We grew a lot from the first game to the last. But Rain or Shine came with a great game plan to irritate the triangle offense,” he said. “Again, [the system] is still new to us and we’re still learning. [Yeng Guiao] has had a couple of conferences to defend it. His past teams are very educated with the triangle, so Rain or Shine had a great game plan and we came out flat.”

Moreover, Jeffers gave props to that stingy Elasto Painters’ defense which, he said, affected greatly the way Ginebra executed in their two meetings.

“That’s Rain or Shine. They just don’t guard me like that, they guard everybody like that. It’s their team, I had to adjust to what they are doing, but at the same time, I’m in a triangle offense. It’s a lot of things going in my head,” he said.

With a little more conditioning, Jeffers is optimistic Ginebra can soon figure out the nuances of coach Tim Cone’s system

“The more we get to work, we have time off but we got a little bit more time to come back if it works out, the more we can work on the things that we could work on.”

“I wasn’t too much worried about them. I was more worried on getting my teammates involved. In my head, I think I can score against anybody, but I had to deal with my teammates’ confidence and things like that,” he continued. “We’re still learning each other, but the sky is the limit.”

The enigmatic import is set to return for the Governors’ Cup on July, but though he sees the continued chemistry working in Ginebra’s favor, he still acknowledges that it’s still going to be anybody’s ballgame.

“It’s an advantage for Ginebra because we didn’t have to deal with working with another person and start all over again. On the overall PBA side, it’s basketball. Teams will make adjustments. Teams are going to bring in imports,” he said.

And his goal for the third conference remains the same: bring respectability back to Ginebra.

“It’s just getting Ginebra to the point that they’re contenders every conference like Rain or Shine and you can learn that with consistency, team camaraderie, and staying together at the same page,” Jeffers said. “Ginebra will be back.”