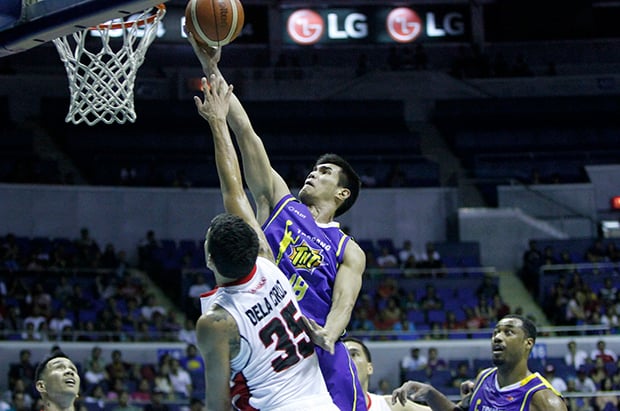 In a complete turnaround from Game 1, Troy Rosario could not buy a bucket from rainbow country as TNT fell to Alaska, 85-81.

After his scintillating 7-of-10 shooting from threes two days ago, the rookie went cold and missed all of his four shots from three-point land, including what could have been a go-ahead basket for the Tropa in the clutch.

With TNT trailing 83-81 and given only 8.3 ticks to get a shot off, Jayson Castro found Rosario open at the right corner.

Without hesitation, Rosario took the shot.

Unfortunately for the Tropa, the ball rattled out and went over the back.RJ Jazul iced the game at the free throw line with 2.6 seconds remaining, sending the series to a deciding Game 3 on Friday.

Rosario was not the only one who struggled to find his mark from the outside as the whole TNT crew managed to hit only 4-of-24 from the area with Castro missing all of his nine attempts.

Rosario, though, wasn’t surprised with the way his team shot the ball with Alaska’s defense able to throw TNT’s offense off.

With both teams’ campaigns on the line in Game 3, Roaario said TNT will go all out the way Alaska was with its back against the wall on Tuesday.