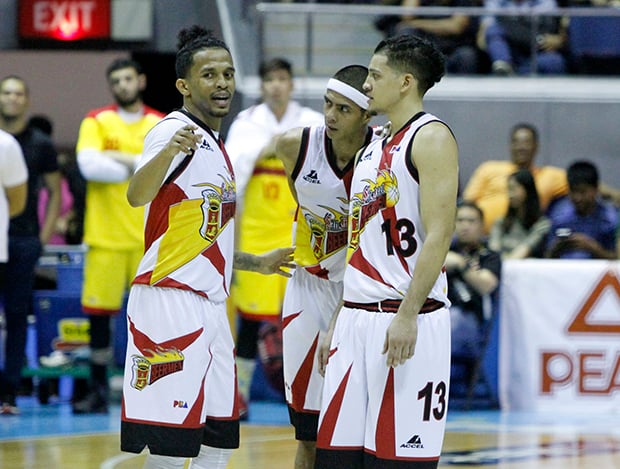 With San Miguel pushed to a deciding Game in its quarterfinals duel against Star, Chris Ross had flashbacks of the Beermen’s previous elimination games.

“It kind of reminded me of the Finals where our backs were against the wall in the last four games,” he said, reminiscing the Beermen’s historic comeback from 0-3 down against the Alaska Aces in the 2016 Philippine Cup Finals.

And on Wednesday, San Miguel saw itself needing another big comeback after it trailed by as much as 11 in the fourth quarter.

“It was big for us. We don’t want to go home and get embarrassed. We showed why we are champions and our championship pedigree. We made enough plays in the end to win the game,” Ross, the MVP of last conference’s thrilling Finals series, said, as the Beermen eked out a 103-99 victory over the Hotshots.

Ross had 13 points, five assists, four rebounds, and three steals, but it was his hustle that proved to be the difference as he deflected seven passes and recovered four looseballs, all crucial in the tight endgame which allowed his team to progress in the 2016 Oppo PBA Commissioner’s Cup semifinals.

“It was a familiar territory for us. We know we didn’t want to go home early and we just fought and stayed together,” he said.

Though everybody wrote off a potential of an upset, Ross said the seeding hardly mean anything in the duel as the two teams gave their all on the court.

“In this conference, everyone was two games away, so it really didn’t matter if you were the eighth seed or the first seed,” He said, crediting Star for the hard-fought series it gave the Philippine Cup champs.

“[Star] was right there. They’re a year removed from winning a Grand Slam. They lost their coach and a player or two, but their core is intact and they know how to win and they know to turn on the switch when it comes to the playoffs, and they showed it in this series,” continued Ross. “Luckily for us, we’re championship-tested also.”

San Miguel Beer faces Rain or Shine next in a best-of-five semifinals series starting on Sunday.