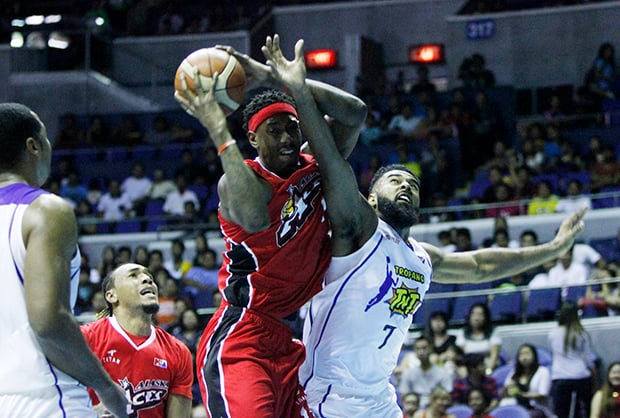 Alaska Milk dethroned PBA Commissioner’s Cup titlist Tropang TNT, 99-81, foiling what could have been a first ever playoff faceoff between sister teams the Texters and the Meralco Bolts.

With an efficient, methodical game on both ends, the Aces ended the Texters’ reign and grabbed the last berth in the Commissioner’s Cup Final Four.

The Aces and the Bolts clash in a best-of-five semis showdown beginning at 7 p.m. Monday at the Smart Araneta Coliseum.

The other semifinal playoff pits San Miguel Beer versus Rain or Shine.

“Of all the things I expected, I didn’t expect what happened in this game,” said Alaska coach Alex Compton on the way they dominated the Texters in their knockout setto.

“What we talked about was defense have to be near perfect. As a coach, I know nothing is perfect. I’m grateful the guys put that kind of effort. It was special,” Compton also said.

With a tremendous defensive effort coupled by a torrid shooting, the Aces pulled away in the second period and utterly dominated the Texters in the final half.

The Aces pulled a big game together with Rob Dozier and Calvin Abueva top scoring with 20 and 18 points, respectively.

The Aces pummeled the Texters in the second quarter, cutting loose from a seesawing battle to pull away, 53-37, at halftime.

The Texters were still ahead, 30-31, before starting to fade.

Dozier, Abueva, Exciminiano, Menk and RJ Jazul led Alaska’s charge as they pounded the Texters, 32-16, in the second period.

Not helping TNT’s cause were the early fouls committed by Troy Rosario, Moala Tautuaa, Dylan Ababou and Ryan Reyes.

Tautuaa and Reyes were called a flagrant foul each on Menk and Exciminiano, respectively.