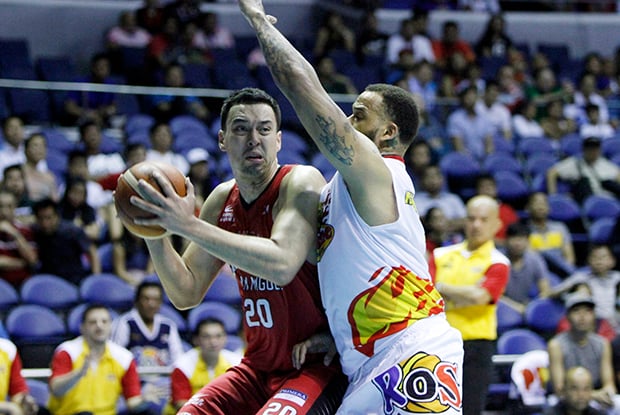 Before he takes on San Miguel Beer’s June Mar Fajardo, Pierre Henderson-Niles got his first test against Barangay Ginebra San Miguel and its 7-foot center Greg Slaughter in the quarterfinals.

Slaughter has been playing his best basketball under head coach Tim Cone, leading the statistical race for the Best Player of the Conference award through the elimination round. The Gin Kings, too, were on a roll heading into the playoffs until they ran into the Elasto Painters and their menacing import.

Henderson-Niles recalled his matchup with Slaughter and the former Memphis Tiger wasn’t impressed.

“Everybody was talking about that big guy Greg, he was soft,” said the hulking 6-foot-8 center on Saturday shortly after the Painters wrapped up their practice session.

Slaughter averaged 18.5 points, 9.7 rebounds, and only 1.5 turnovers per game in the elimination round. His numbers, however, dipped to just 12 points and 7 rebounds while his turnovers doubled in the two games he played against Rain or Shine in the quarterfinals.

The Painters swept the Gin Kings in the best-of-three series.

Less than a week removed from facing Slaughter, Henderson-Niles gets his crack against the most dominant player in the league today in Fajardo in a best-of-five duel starting on Sunday.

“I know I can guard any player in the league,” he said. “Hell yeah [I’m going to cancel out Fajardo].”

“Let’s see what’s going to happen tomorrow (Sunday) at 5 ‘o clock,” he added. “We’re going to see what this battle is all about.”