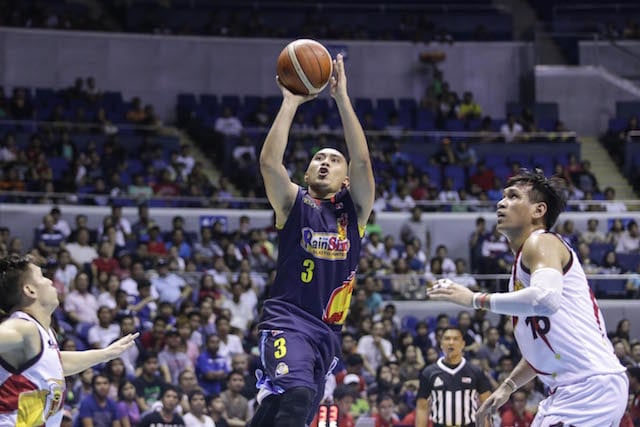 Rain or Shine now has a clear shot at redemption.

Clicking on all cylinders as the game wore on the Elasto Painters fashioned out a 124-99 drubbing of the San Miguel Beermen Sunday to realize a second straight finals stint in the 2016 PBA Commissioner’s Cup at Smart Araneta Coliseum.

In-form Paul Lee finished with 18 points and five assists in leading a more balanced attack by Rain or Shine as it totally dominated SMB from the second quarter on to bounce back from a numbing loss in a big way and close out the best-of-five series in four games.

“It’s a great feeling to be back in the finals again, especially after beating a great team like San Miguel,” said Guiao, whose team ceded the mid-season tournament crown to TNT last season, but only after a double overtime loss in the deciding Game 7.

Rain or Shine now awaits the winner of the other semifinal pairing between Meralco and Alaska.

The best-of-seven Finals could start as early as Wednesday or Friday at the latest. The Aces, who lead the series, 2-1, are aiming to close out the Bolts on Monday.

The Beermen prevented an E-Painters sweep by winning Game 3 last Thursday despite playing all-Filipino and tapped Arizona Reid as an immediate replacement.

The two-time Best Import, supposed to reinforce SMB only in the season-ending Governors Cup, arrived Saturday and responded with a game-highs of 25 points and 17 rebounds.

But only Marcio Lassiter, Alex Cabagnot and June Mar Fajardo were able to give the necessary support and the Beermen now had to content themselves with third place.

In contrast, Pierre Henderson-Niles, Gabe Norwood, Chris Tiu, Jericho Cruz and Raymond Almazan delivered the goods for Rain or Shine as it realized a sixth title series appearance with Guiao, a six-time champion coach, in his 15th overall.

Guiao has enough time to savor the victory.

“I didn’t expect this to be this easy, especially with AZ (Reid) coming in,” said Guiao. “I was kind of worried what kind of shape he was going to be in. But I knew he was not yet 100 percent, so this is the best time for us. It was a big break for us. He missed a lot of shots. Given another week he would have made those.”

In contrast, Rain or Shine made 43 of 80 attempts, including 11 of 29 three-point tries, and turned the Beermen’s 18 turnovers into 21 points as the E-Painters emerged with their highest output for the season.

It was not as close as the final count suggests as the E-Painters sat on a 116-90 cushion before Guiao started pulling out his main players for the clean-up.

It all started in the second period as Lee fully hit his stride with 10 of his points, including five during a telling 17-4 surge that turned Rain or Shine’s slim lead of 29-28 into a more comfortable 46-32.

With Niles and Tiu chipping in, the difference got stretched to 61-40.

Reid and Cabagnot tried to lead a comeback and SMB was partially successful as the Beermen clawed to within 11. But Cruz nailed back-to-back 3s from the left corner, stoking the E-Painters’ charge to a 92-70 spread at the end of the third canto.