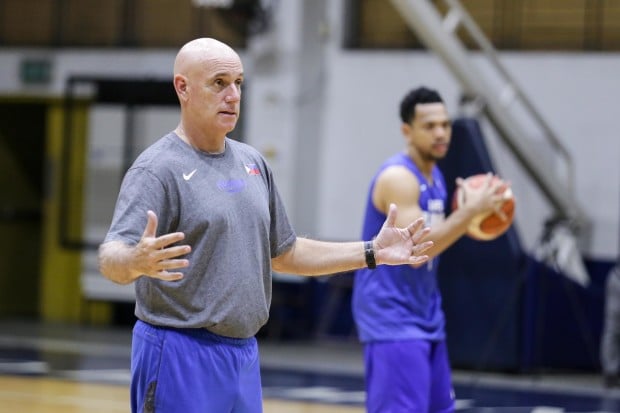 As watched the game from the commentators’ booth, Gilas Pilipinas head coach Tab Baldwin couldn’t help but but feel relieved when Calvin Abueva and Paul Lee both returned to action after separate injury scares.

Baldwin worked as a TV analyst in Game 1 of the 2016 PBA Commissioner’s Cup Finals Friday night and got a chance to observe players who are also part of the national team pool.

“I saw Paul and Calvin both go down with ankle problems tonight, but I’m glad that they kept on playing,” he said.

Abueva hurt his right ankle when he landed on Beau Belga’s foot late in the second quarter, while Lee sprained his right ankle after stepping on Pierre Henderson-Niles’ foot with three minutes left in the game.

Both players managed to finish the game for respective teams with Rain or Shine taking home the opener, 105-97.

With the Gilas Pilipinas set to converge anew on May 18, the American-Kiwi coach is optimistic that the national team will be in full force as it enters the homestretch of their preparations for the Manila Olympic Qualifying Tournament.

“We expect him in. I don’t know if he has bookings yet, but it’s important that he gets in a few days before we start so he can get the jet lag out of his system and feel comfortable,” he said.

Baldwin has lined up a series of tune-up games for Gilas Pilipinas ahead of the July tilt to be hosted in Manila.

“We’re hoping to have five, two of which is against Iran,” he explained. One will be a sort of scrimmage, coach-controlled scrimmage. It might not be a game, we might wipe the score during the game and we may ask each other to play different defenses, so it will be a true scrimmage, more like a practice session, rather than a game. Then we’ll have a public one.”