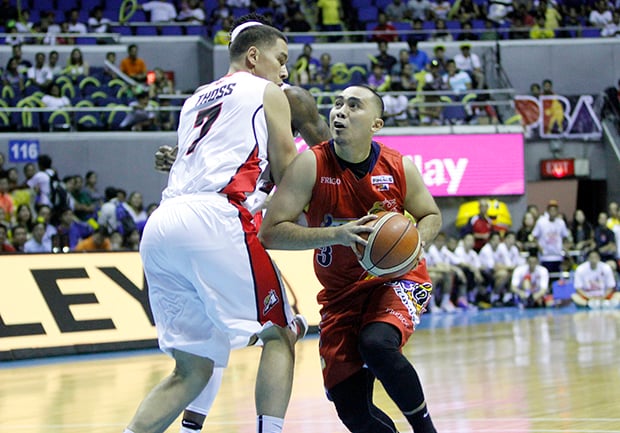 Paul Lee came through with another heroic act for Rain or Shine Sunday, executing a dagger play right before the buzzer in a 105-103 escape act by the Elasto Painters over the Alaska Milk Aces in Game Two of the Oppo PBA Commissioner’s Cup Finals at the Smart Araneta Coliseum.

In the right place at the right time at the finish, Lee collared a crucial uncontested offensive rebound on a missed shot by Beau Belga then coolly made an uncontested fall-away with only 0.1 second left as the E-Painters took a commanding 2-0 lead in the best-of-seven title series.

Lee and his teammates go for a stranglehold 3-0 advantage at the resumption of the series Wednesday also at the Big Dome.

“Lot of players stepped up when we needed them. Jewel Ponferada, Jericho Cruz, Jeff Chan, Beau Belga did and, of course, there was Paul,” said Rain or Shine coach Yeng Guiao.

For sure, Lee’s heroics were not limited in those dying seconds.

With Rain or Shine trailing by eight, 76-84, early in the fourth, Lee provided the initial spark and himself capped a 24-7 attack that carried the E-Painters ahead at 100-91 with 3:25 left to play.

And as the Aces threatened to send the game into overtime, Lee came through again to fend off Alaska and foil its shot at forging a 1-1 tie in the series.

“Every second counts. At the very end, we had a breakdown,” rued Alaska coach Alex Compton.

“We haven’t played smart enough, hard enough to win. We’ve gotta earn it with a lot more precision that’s for sure,” Compton added.

In a match that was tougher than the previous match, the E-Painters proved to have a lot to offer.

Lee and Chan top scored with 17 points apiece while Belga, Cruz and Ponferada added 14 each.

Pierre Henderson-Niles once again had limited numbers but made as much impact with his sheer intimidating presence on defense.

Rob Dozier was held to 18 points after his 41-point explosion in Game One, but the Aces put up a tougher stand in this game with tremendous help from RJ Jazul, Sonny Thoss, Calvin Abueva and Cyrus Baguio.

Dozier converted a short baseline jumper shortly before the buzzer as the Aces took the half at 51-49.

The Aces held control most of the first half with their defense working, forcing the E-Painters to 11 turnovers. In Game One, Rain or Shine committed only 13 turnovers in the entire match.

Thoss and Jazul, unable to make an impact in the series opener, went to work early in this game, firing 10 points apiece in the opening half.

The E-Painters briefly held the lead, 72-68, in the third on an eight-point binge by Belga, but then the Aces went on an 11-4 tear to carry a 79-76 advantage into the payoff quarter.

The two teams engaged in a nip-and-tuck battle to the finish.