Compton: Playing minus key players not an excuse for Aces 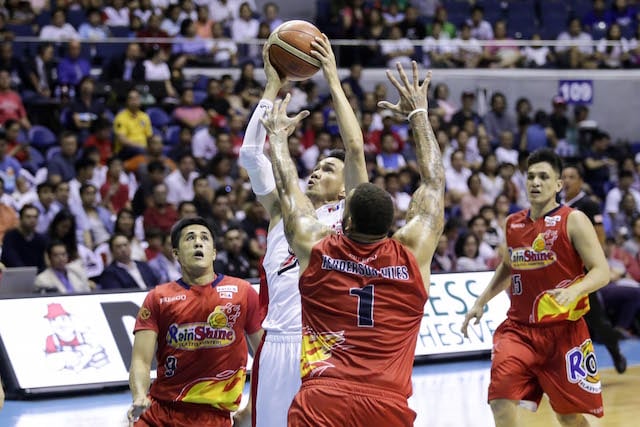 Despite dealing with injuries to its key players, Alaska has been good enough to beat quality teams in TNT and Meralco in playoff series’ and make the 2016 Commissioner’s Cup Finals.

And even minus Vic Manuel, JVee Casio and Eric Menk, head coach Alex Compton believes the Aces are still more than capable of defeating Rain or Shine in their best-of-seven championship duel.

“For me it’s not an excuse, it  happens to every team in the league,” Compton told reporters on Sunday after Alaska’s 105-103 loss in Game 2 on a buzzer-beater by Paul Lee. “We have good players on our team. We talked, we practiced, we’re just not sharp enough.”

Manuel (calf) has been out since Game 2 of the quarterfinals against TNT while Casio (knee) has only appeared in the first five games of the elimination round. The latest casualty, Menk got hurt in Game 3 of the semifinals against Meralco.

“I don’t wanna belittle the contributions of those guys, obviously, they’re important but I don’t dwell on it. It’s not an excuse. When we do some things right we can win that game and we didn’t do it,” Compton said.

Compton has all the reasons to feel confident despite being down, 2-0 in the series especially with Games 1 and 2 could’ve gone either way.
What concerns Compton, however, is his team’s ability to finish games which boils down to execution.
“We talked about a bunch how every second counts and how we need to make less mistakes and be smarter and again to the very end, we have a breakdown, we don’t execute what we wanna do and they score,” said Compton.

“It’s not that in two games we played terribly but we definitely haven’t played well enough or smart enough to win and they’ve won both of them,” he added. “We’re gonna have to earn it with a lot more precision, that’s for sure.”

The Aces hope to avoid a 3-0 hole on Wednesday night in Game 3 at Smart Araneta Coliseum.