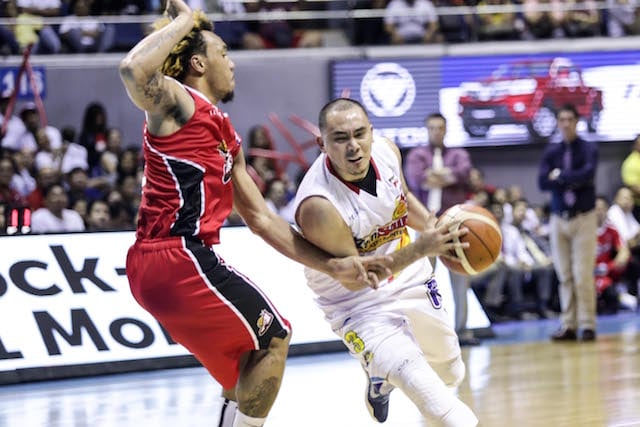 Rain or Shine blew a big lead before salvaging a 112-108 victory over Alaska on Wednesday night to move within a win away from clinching the 2016 PBA Commissioner’s Cup title at Smart Araneta Coliseum..

The Elasto Painters lost a 27-point lead they built in the third quarter as the Aces threatened to within five, 110-105, after a three-point play by Rob Dozier with exactly 15 seconds to go.

Fortunately for Rain or Shine, it established a big enough lead to hold on and Alaska just didn’t have ample time to complete its comeback.

The Aces already looked like a beaten team after three quarters where they were buried by an avalanche of 3-pointers from the hot-shooting Painters and fell behind by 23, 95-72, entering the final 12 minutes.

But Alaska managed to slowly chip Rain or Shine’s lead away with the help of the Painters themselves, who played sloppy down the stretch.

JR Quiñahan shot 4-of-5 from downtown en route to an 18-point night, Jericho Cruz added 17 points to compensate for his three turnovers late and Pierre Henderson-Niles posted a double-double with 11 points and 13 rebounds for Rain or Shine, which improved to 9-1 since the burly import arrived.

Dozier finished with a game-high 23 points for Alaska, which outscored Rain or Shine, 36-17, in the fourth quarter.

The Aces have now lost seventh straight games in the Finals, already a PBA record, after dropping Game 7 of their Philippine Cup championship duel with the San Miguel Beermen, who made history after coming back from 0-3 down.

How Twitter reacted to reports of Kobe Bryant’s death