Banchero, Aces have ‘no doubts’ they can come back vs ROS 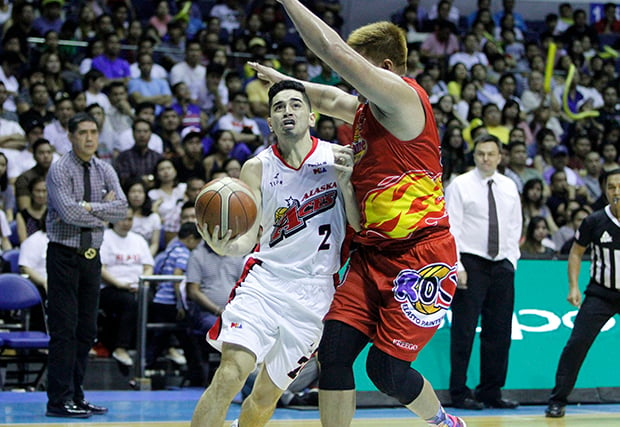 The real Alaska showed up on Friday.

Lackadaisical all series long, the Aces dug deep and averted a sweep, dealing Rain or Shine a 111-99 Game 4 defeat.

“We showed up and I really like to commend our players. We challenged them, talked a lot, and contrary to perhaps popular belief, we didn’t make many adjustments. We just did what we’re supposed to do,” said coach Alex Compton.

And one of the players stepping up for Alaska in this championship duel is Chris Banchero.

The Fil-Italian guard scored 10 points in the third quarter breakaway to finish with 17 points, eight assists, and three rebounds in the huge win.

“It was a big game,” Banchero said. “We looked more like Alaska tonight. The past three games, we were really flat. We still got a big hill to climb so we got to take it one game at a time.”

Looking for answers after three consecutive defeats, Banchero said the coaching staff never lost faith in them and kept on pressing them to get out of their slumber.

“The coaches told us to play like you guys know how to play, how we usually play. We came out real flat and you can’t just do that in a series like this especially when Rain or Shine is playing so well,” he said.

But despite the deep hole in the Finals series, Banchero said no one in his team ever felt that they are going to get swept, let alone lose this battle.

“We have no doubts at all. We needed to pick this one up. You saw the way we played defense tonight, it’s a lot different than how we worked the game before. It’s still 3-1, it’s still tough, but I think we can do it,” he said.

“We were awake today. Hopefully we’re awake on Sunday. We got to play with a sense of urgency. They got a great coach and a great coaching staff. They’re going to be ready for us on Sunday.”

Game 5 is on Sunday, still at Smart Araneta Coliseum.

Read Next
Guiao: We will try to make balloons fall on Sunday
EDITORS' PICK
Taal Volcano flexes signs of restiveness anew
Get exciting deals and discounts when you download the new McDonald’s App
China expands lockdowns to 25M people to halt viral outbreak
SM continues to send relief assistance to remote towns in Batangas
Beyond water service: Maynilad builds massive infrastructure projects to clean up Metro Manila waterways
BIR grants relief to Taal-affected taxpayers in Batangas
MOST READ
Taal Volcano flexes signs of restiveness anew
Lacson on Duterte’s threat to end VFA over Bato’s canceled visa: Where is the connection?
Part of Aurora Boulevard in Cubao closed from Jan. 25 – Feb. 1
Lacson presses SC to rule on international agreements like VFA
Don't miss out on the latest news and information.