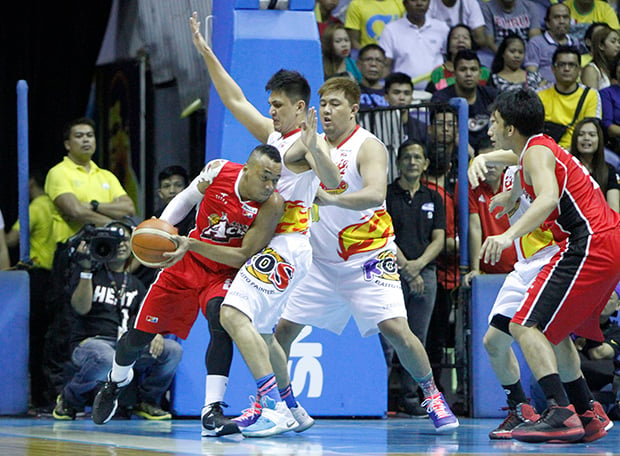 Rain or Shine and Alaska Milk head for another battle Wednesday.

The Aces still refused to quit, beating out the Elasto Painters, 86-78, in a gripping duel Sunday to further cut their deficit to 2-3 in the Oppo PBA Commissioner’s Cup best-of-seven titular series at the Smart Araneta Coliseum.

Surviving a fifth do-or-die in the post-elims play, the Aces can arrange a winner-take-all setto if they can make it three in a row on Wednesday also at the Big Dome.

“It’s another proud game for my guys,” said Alaska coach Alex Compton of their eight-point conquest of the E-Painters in Game Five.

Calvin Abueva came through with 20 points and 13 rebounds with Rob Dozier, RJ Jazul and Cyrus Baguio contributing double-digit outputs for the Aces who dealt the E-Painters crucial beating in the last six minutes of play.

Abueva, Dozier, Jazul, Sonny Thoss and Dondon Hontiveros teamed up at the finish, getting away a lethal closing run for Alaska from a 69-all count.

The Alaska coach, however, praised his guys a lot more for their defensive effort.

The Aces held the E-Painters for their lowest output in a game since a 78-71 win over Purefoods/Star on a Valentine’s day match during the Commissioner’s Cup last year.

But to no avail.

Abueva scored back-to-back baskets from underneath then on a short jumper as the Aces all but settled the outcome of the game at 84-76 with less than a minute left to play.

Jeff Chan nailed a charity while Jericho Cruz drained a jumper on back-to-back Alaska turnovers in the closing seconds as Rain or Shine led by three, 40-37, at the turn.

The Aces got off to an 11-2 start, prompting the Elasto Painters to call an early timeout before hitting their strides and racing ahead at 17-13.

Rain or Shine built some momentum midway through the third but blew it on a deliberate foul by Beau Belga on Abueva who canned in both charities to light up a 10-2 run that shoved the Aces back in the lead at 54-53.