Norwood shrugs off spat with Abueva, sets focus on Game 6 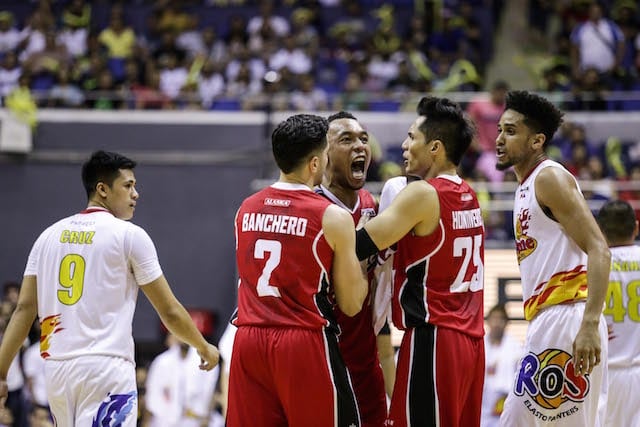 Alaska forward Calvin Abueva and Rain or Shine guard Gabe Norwood got into a heated commotion nearing the final minute of the Aces’ win in Game 5 of their 2016 Commissioner’s Cup Finals series on Sunday night.

After scoring a crucial basket that proved to be the clincher, Abueva let out a scream and gave Norwood a nudge as he was going down the other end of the court, causing the two national team players to exchange some words.

Norwood, though, shrugged the incident off with the game already over and his focus already shifted to Game 6 on Wednesday.

“We’re just talking. It’s over and done. It’s not like we came out mad at each other,” said Norwood. “(Calvin) had some words, he was excited and he should be cause they won back-to-back games against us. I wasn’t happy about it. That’s about it.”

After Rain or Shine held a 3-0 edge in the championship duel, but the Aces have responded, winning the last two to make it a series.

Despite the frustration that comes with the back-to-back defeats, Norwood and the rest of the Elasto Painters are hoping to regroup in time for the next game.

“It all comes down to how we counter that on Game 6. Hopefully, his trashtalk ignite us, push us a little bit more,” Norwood said.

“Calvin is going to be Calvin. That’s part of his game and that’s how he helps his team.”

Norwood sees the two-day break as a chance for Rain or Shine to refocus and finally close the deal out come Game 6.

“We worked hard to get those three wins and out ourselves in a situation to win it. We only need one more to win the championship. We got an extra day rest to lick our wounds and be ready to go on Wednesday,” he said. “The plan is to come out, make the proper adjustments, play a little bit smarter, and hopefully, get the win.”