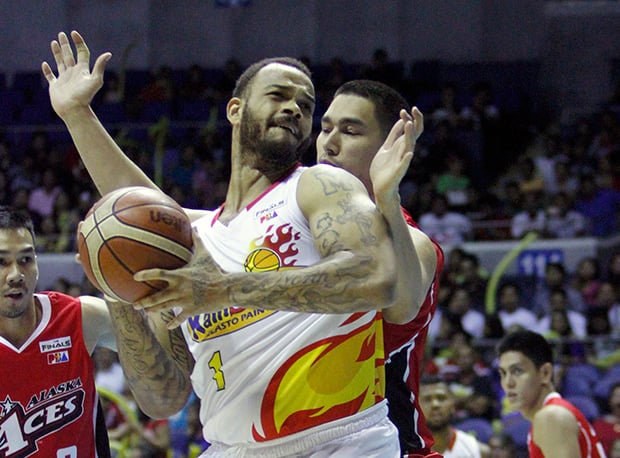 Rain or Shine knows the game would be a lot easier if only import Pierre Henderson-Niles could provide more lift on the offensive end.

Averaging measly 4.5 points and 6.5 rebounds in the Elasto Painters’ last two games — both losses — the consensus has been for the burly import to impose himself more to finally clinch the 2016 PBA Commissioner’s Cup title.

The players admire the fact that Henderson-Niles is making efforts, trying his best to contribute. Unfortunately for the Painters, Henderson-Niles’ aggression didn’t translate much on the court and instead, it has put the center in foul trouble early.

“The biggest thing for him is to stay out of foul trouble,” said Gabe Norwood. “That also goes for all of our bigs. We need to help them too.”

Those fouls really hurt Rain or Shine in Game 5. It also didn’t help that another key player in Beau Belga fouled out.

“I felt na we were not running our usual fast-paced game and baka hindi siya makasabay sa pace,” explained Guiao on why he decided to sit Henderson-Niles down the stretch. “I experimented a little bit, trying to keep the pace fast without him on the floor. Nung nilabas ko siya, he already has five fouls. I put in Gabe to quicken the pace, and it was okay at bumilis naman kami.”

“Kaya lang we didn’t get the breaks, and they made some big baskets. (Calvin) Abueva got open for four points during that stretch, and that was really where the game got out of hand for us.”

Despite Henderson-Niles’ inefficiency on the offensive end, Norwood noted the import has been giving them the things they need in terms of rebounding and defense.

“Pierre does what we need him to do. He got us this far just in terms of how he went this conference. He only lost three games since he’s been with us,” he said.

“Naturally, you want everybody to play well, but playing well for some guys isn’t the same as for the other players. Pierre will continue to do what he does.”

Henderson-Niles declined for an interview after posting only six points and eight rebounds in Game 5. He also shot 3-of-9 from the field and had five fouls and five turnovers in 27 minutes.