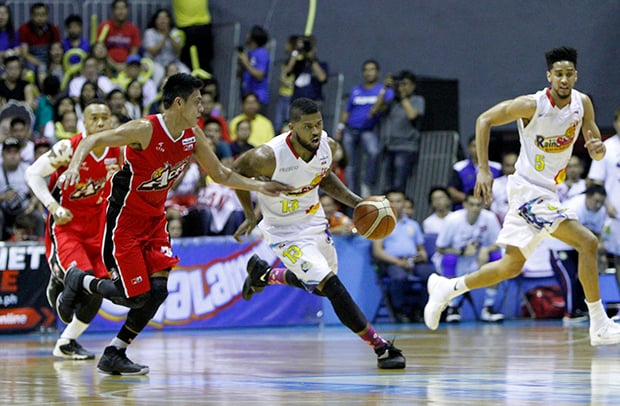 From a career-high 30 points in Game 4, the rookie was limited to just one point in Game 5, rendering him ineffective as Rain or Shine failed to close the series out for the second time with an 86-78 defeat on Sunday.

Ahanmisi noted that this time, the Elasto Painters were the ones who weren’t playing like themselves.

“We’re just trying to take advantage of mismatches. It kind of messed us up because we weren’t looking for ourselves. We’re looking too much on the post. We’re not playing basketball, we’re focusing on the mismatch and we weren’t driving and playing our game normally,” he said.

With two consecutive defeats, Ahanmisi knows the Aces now hold the momentum, and it’s now up to the Elasto Painters to regroup and clinch the franchise’s second title.

“The first three games, that’s how we’re playing. Now, the momentum has definitely switched. We just got to minimize our costly mistakes. They’re a good team so we can’t hope to be lucky,” he said.

“We’re going in with the same mentality, coming to win,” continued Ahanmisi. “They’re going to come play hard like the past two games. We can’t get down with this one. This hurts, but we got to keep our heads up.”