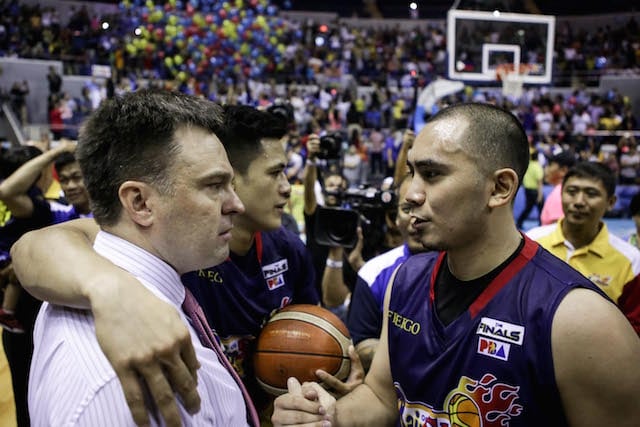 But not one celebration was for him.

First three was for San Miguel Beer, including the so-called “beer-acle” when the Beermen won four straight after being down, 0-3, and the latest was Rain or Shine’s championship on Wednesday night.

Alaska was having its own comeback, trailing three-games-to-none in the series, the Aces won two in a row.

But that was the closest the Aces would come as the Painters celebrated the franchise’s second championship following a 109-92 victory in Game 6.

Compton, though, is not a man of excuses and he graciously accepted his team’s fate.

“The better team won,” said Compton. “Rain or Shine played great, some of those threes were challenged and they were hitting them, they played great, they had a great series, they’re clearly well-coached and they had a bunch of guys who were just making shots, they made the plays.”

Rain or Shine shot 15-of-27 for 56 percent from the three-point area while Alaska made only 12 out of their 31 attempts.

Of those 15 three-pointers the Painters made, three of them happened in rapid succession with Maverick Ahanmisi, Chris Tiu, and Jericho Cruz combining for an 11-3 run to put Rain or Shine up, 95-75, in the fourth quarter.

Even though Compton lost, he still felt a tinge of happiness for Rain or Shine, the franchise where he started his coaching career in 2006.

“And as much as I’m pained by the fact that the guys that I love in that locker room, I’m also happy for Raymond Yu and Terry Que and everybody at Rain or Shine when I started out,” said Compton.

“You ask them, it’s not easy to get one and they kept persevering and they’ve been sustaining excellence across the board, every conference.”

Rain or Shine has been a staple in the PBA playoffs and the last time the Painters failed to qualify was in the 2012 Commissioner’s Cup, the conference before they won their first title.

A runner-up finish in the 2015 Commissioner’s Cup was the Painters last appearance in the Finals.

“I think they should be commended for it, and they deserve the championship.”